Wonder Woman was one of my favourite films from last year, and its soundtrack was the first film soundtrack I’d bought in a few years.

The No Man’s Land sequence in the film, stands out because it’s Diana realising her true potential and becoming the hero she was born to be. She doesn’t believe it when she’s told there’s nothing they can do, nothing no man can do, and instead inspires and leads people in what’s right.

The music that accompanies that scene adds to its power. I love how the beautiful music slowly builds, it starts off so quiet but as Diana walks across No Man’s Land it gets louder and more self-assured.

I think this piece of music is inspiring and emotional. I listened to it on my way to job interviews as it makes me feel confident in my abilities and makes me feel positive that I can tackle whatever is thrown my way.

I said earlier on in this A-Z Challenge that Gimme Shelter used to be my ringtone but was replaced by another song that I’d be talking about. Well, my phone ringtone is this song, more specifically the Wonder Woman theme with all the electronic string instruments that kicks in at 3:23.

I just love this musical work, the whole of the Wonder Woman score is great, but No Man’s Land is an instantly memorable piece of music.

If you want to see the music in action in the film, it starts in this scene as our heroes walk through the trenches and continues in this scene where they fight to save a town. I’d definitely recommend them, I find myself watching them every now and then when I need a boost.

Last night I went up to London to see Hans Zimmer live at the Eventim Apollo in Hammersmith and it was one of the best nights ever.

I love film scores (they are the best thing to listen to when you’re writing a dissertation) and Hans Zimmer has scored some of my favourite films and a lot of his music has become easily recognisable and iconic. So, when I heard that Hans Zimmer was going to be performing his own music for just two nights I knew I had to be there. A manic scramble for tickets on the morning they went on sale led me to (amazingly) get front row seats – yes they were no doubt more expensive than seats further back or in the circle but I’m so glad I paid that money because the seats were incredible.

The show kicked off with a medley of music from Driving Miss Daisy, Sherlock Holmes and Madagascar which were all a lot of fun. Hans Zimmer would talk in between each musical selection about how he got the job of working on the film the music was from or how he got the ideas for the arrangement. One thing that struck me was how charismatic Zimmer was. I know it’s presumptuous but for someone who isn’t necessarily front and centre when it comes to a film he was a great public speaker full or charisma and humour. I suppose while he may not be a lead actor he is the leader of an orchestra and a choir.

When certain films scores were performed I got goose bumps and when The Lion King was performed I got tears in my eyes (it’s my favourite Disney film). The Lion King compilation was kicked off by Lebo M singing Circle of Life – I think that got one of the biggest reactions from the audience. Afterwards Hans Zimmer said that this was the second time (the first being the night before) that Lebo M had performed with him on The Lion King soundtrack since it was first recorded twenty years ago. That made the whole thing even better.

The first half was incredible and finished off with a Pirates of the Caribbean medley which was a lot of fun. 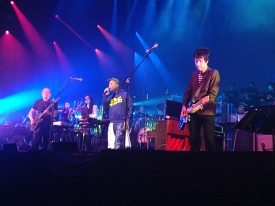 During the second half there was a surprise appearance from Pharrell Williams. I loved the set up for this. Hans Zimmer said that the string section would be playing something a little different, something classical, which they did for about thirty seconds before the music changed and Pharrell appeared on stage to sing Happy. Needless to say the audience went slightly mad and it was so much fun.

Then Pharrell joined Hans Zimmer to perform Electro from The Amazing Spider-Man 2 which was incredible. That music is eerie and manic when a part of the film but when it’s live it makes to ten times more frenzied and brilliant.

The show was finished with a medley of music from The Dark Knight trilogy which was fantastic. When the first notes were played (which sound kind of like bat wings to me) the crowd started to scream.

Hans Zimmer got a standing ovation when it finished and no one sat down until the curtains opened once more – for an encore of music from Inception. That really was incredible and it made the hairs on the back of my neck stand up.

Hans Zimmer is obviously an amazing composer and a talented man playing the guitar, the banjo, the piano, and the drums during the course of the show but his musicians, orchestra and choir can’t be left out. They were all incredible. Where I was sitting I was looking directly at Richard Harvey who plays any type of pipe and woodwind instrument you could think of as well as a keyboard and some sort of harp-thing. Seriously there were at least twelve different woodwind instruments surrounding him including the clarinet and panpipes or various sizes and there were so many instruments that I couldn’t name. The violinists Ann Maria Simpson and Aleksey Igudesman were fantastic with Igudesman putting on different hats to correspond with the film score they were playing – he wore a Roman solider helmet during Gladiator and a deerstalker during Sherlock Holmes. Czarina Russell was an amazing singer, joining Lebo M in The Lion King medley and taking the lead in other songs, she also played the drums and huge pipes that she hit with hammers. Really I could go one and mention every single person in Hans Zimmer’s band because they were all incredibly talented and they all looked like they were having so much fun.

I think I’ve used a lot of superlatives during this post but they are all well deserved. It was honestly the best show I’ve ever been to. I’ve been to gigs and concerts and stage shows but nothing has made me feel as happy and overwhelmed as the concert last night. All the musicians were so talented and Hans Zimmer led them all beautifully. If I ever get the chance to see Hans Zimmer live again (or any film composer live) I am going to grab it with both hands.

Thank you Hans Zimmer for making incredible music and making films sound so much bigger with it. Thank you for a wonderful concert and night I won’t be forgetting in a hurry. 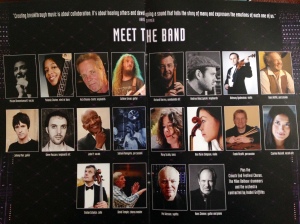