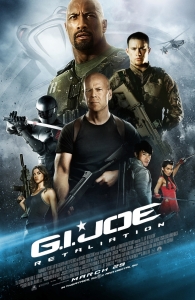 When the Joe’s are betrayed by their President (Jonathan Pryce), the survivors must hide and pool all their resources in order to stop whatever deadly plan he and Cobra Commander (Luke Bracey) have put together.

While there’s still some advance, sci-fi-esque tech in G.I. Joe: Retaliation, mostly courtesy of Firefly (Ray Stevenson) and his electronic insects, it’s generally a lot more grounded in reality. There are no super suits for the Joes, they are purely military characters, and they’re all American this time.

The surviving Joe’s are led by Roadblock (Dwayne Johnson) proving once again that the Rock can help reenergise any franchise. There’s also Lady Jaye (Adrianne Palicki) and Flint (D.J. Cotrona), and Snake Eyes (Ray Park). Snake Eyes and his feud with Storm Shadow (Lee Byung-Hun) is still a highlight of this franchise, it’s always nice to see a female badass in these testosterone-heavy films, but Flint is such a generic action man character that anyone could’ve been in that role – I mean, the man isn’t even on the poster. Channing Tatum briefly reprises his role as Duke and has much more charisma this time round and he could’ve easily fitted into the Flint character’s role. Plus, his chemistry with Johnson was really good too.

The action sequence that stands out in G.I. Joe: Retaliation of course features Snake Eyes. The first part is him fighting Storm Shadow in a hallway and how the music drops out so there’s just the echoes of gunfire or swords clashing is really effective. Then there’s the daring escape where he and Jinx (Elodie Yung) are against dozens of ninjas and end up fighting while abseiling down a snowy cliff face. It’s a thrilling sequence and while the film kind of slows down to allow for the Snake Eyes plot which is almost like a side quest to the main plot with the Rock and co. when it looks that good and is that entertaining it’s hard to be mad about it.

The rest of the action sequences are more on the small-scale (compared to the globe-trotting first film). There’s still a lot of gunfire and explosions but there’s also so hand to hand combat scenes and more of an espionage vibe as the Joe’s try to figure out what’s going on with the President. Gotta say Jonathan Pryce is delightfully hammy as the evil President and makes the silliness of the situation almost work.

G.I. Joe: Retaliation is a half-decent, popcorn, action flick. It doesn’t require too much brain power, there are some cool action sequences and mostly thanks to the Rock, a lot more of the characters are entertaining this time round. 3/5.