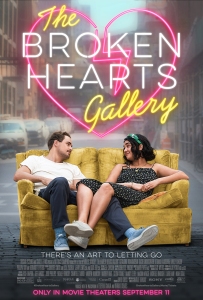 Lucy (Geraldine Viswanathan) can’t help but hoard past mementos from failed relationships, but after her latest breakup with her first proper Grown Up boyfriend Max (Utkarsh Ambudkar) her best friends convince her to start to try and let go of the past. In doing so, Lucy beings to curate an art space dedicated to past relationships with the reluctant help of wannabe hotel owner Nick (Dacre Montgomery).

The Broken Hearts Gallery doesn’t reinvent the wheel in terms of romcoms but what it does do his hit all the needed romcom beats very well and has a load of charm and a fantastic leading lady in Geraldine Viswanathan. Viswanathan is very funny, and she is the glue that holds this film together. She does a great job of showing the different sides to Lucy and make her sympathetic and believable. Plus, Viswanathan and Montgomery have great chemistry as their verbal sparring goes from friendly to flirty as they get closer.

The Broken Hearts Gallery works because it’s never cynical about romance or the type of genre film it is a part of. Yes, Lucy is a hopeless romantic and Nick is more closed off, but there’s something both satisfying and melancholy about the message of letting go to past relationships. That ability to be able to remember but also move on is important in the breakdown of any relationship, romantic or otherwise. Lucy curates this space in order for her to try and let go and it ends up snowballing into something so much bigger than she could imagine – because she’s not the only one who struggles with the what ifs and maybes.

Besides the romance aspect of The Broken Hearts Gallery, one of the key aspects of both Lucy and Nick’s lives are their friendships. Lucy lives with Amanda (Molly Gordon) and Nadine (Phillipa Soo), one whose been in a relationship for six years and the other that leaves behind a string of broken-hearted models. How they each think of love and commitment is different but then their friendship is so strong. They aren’t afraid to call each other out on their issues but they’re also very protective of one another and their dialogue, while full of quips and not particularly realistic, is often very funny. While it doesn’t get as much screen time as the girls’ relationship, Nick has Marcos (Arturo Castro), a friend/employee and his wife Randy (Megan Ferguson) and their relationship is often both funny and awkward.

The Broken Hearts Gallery is sweet, funny and heart-warming. It’s a film that’s made to put a big smile on your face and has relationships that are full of chemistry – platonic and romantic. It’s just a delightful film that makes you feel better if you’re feeling down. 4/5.