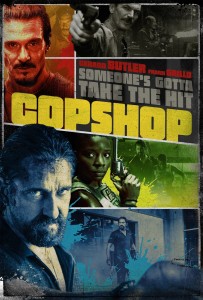 To escape the assassin on his tail, con artist Teddy (Frank Grillo) gets himself arrested by rookie cop Valerie Young (Alexis Louder) so he can hide out in a small-town police station but when the hitman (Gerard Butler) turns up at the precinct things don’t go according to plan and Valerie finds herself caught in the crossfire.

Directed by Joe Carnahan, Copshop is full of larger-than-life characters, gunfights, swearing and chaos. Set primarily in the police station, this film makes great use of the space as the action unfolds. It’s the scenes in the holding cells between Valerie, Teddy and the assassin (kept in separate cells) that standout – especially when things go wrong and Valerie is trapped in the holding cells with the two of them. The verbal sparring between the three is great and while Gerard Butler is good as hired killer Bob, his performance is of the more quiet and menacing kind, and he seems more than happy to give his co-stars the floor.

Teddy is the kind of wily conman character who you want to trust even though you really shouldn’t. It probably helps that Frank Grillo is a charismatic guy who, when not playing out and out villains, often plays characters that verge into more of an antihero. So, it’s easy to see why Valerie might be more willing to trust Teddy (a conman) than Bob (an assassin). With Teddy there’s more of a grey area but to her as a cop Bob is the opposite of the law.

Alexis Louder as Valerie is the true standout. She holds her own against her growly counterparts and knows exactly what film she’s in. She makes Valerie a fully realised character through her playfulness with a friend to her intelligence baiting a colleague who she’s not sure can be trusted. Plus, she’s got the physicality to handle the action sequences too.

Copshop does lose momentum at times but it’s the off-the-wall characters keep you interested and it’s hard not to have a smile on your face when the guns start firing. Got to give a shoutout to Toby Huss’s hitman Anthony Lamb too, he’s delightfully unhinged and is a great contrast to Butler and Grillo. 3/5.

After it’s revealed that the comet that was supposed to pass by close to Earth’s atmosphere but not enter it, is in fact perhaps an extinction level threat, John Garrity (Gerard Butler), his wife Alison (Morena Baccarin), and their seven-year-old son Nathan (Roger Dale Floyd) embark on a perilous journey in search for shelter.

I love a good disaster film. In fact, I tend to love the not so good ones too. There’s something about the spectacle of them and imagining yourself in that situation and what you might do differently to the characters on screen. Greenland is one of the good disaster films. Perhaps I didn’t go into it with the highest expectations after Gerard Butler’s previous end-of-the-world-movie Geostorm which is bona fide fun nonsense, but Greenland really surprised me in how well it balanced the action and the characters.

There is spectacle in Greenland with John being sent flying by a shockwave or he and his family trying to avoid raining burning debris, and the effects are good, but the focus is on these three characters and what they’d do to survive and stay together. There’s news footage shown on TV of the carnage this comet is causing and bleak updates on the radio to give you and the characters a wider understanding of what’s going on in the world during this crisis, but having this family being the core of the film makes the threat more affecting.

There’s the big, standard disaster film stuff they have to deal with but there’s a lot of smaller, more personal stuff that’s even more tense and scary. Getting separated from one another, losing vital medication, it all helps round out each of the characters and get you invested in their fight for survival. The trip to a pharmacy in order to get medicine for Nathan is one of the most tenses sequences as you really start to see the collapse of society when people realise they have nothing to lose and only days to live.

Greenland really finds that balance for showing the good and evil in humanity. There are people who will stop to help someone just as they are committing a crime, there’s those who will do horrible things for selfish reasons, but there’s also people who are still kind and thoughtful in the face of such awfulness. People are complicated, and in an end of the world scenario when people are desperate, who knows how they could act.

There are a few clichés like how John and Alison are estranged at the start of the film and are attempting to give their marriage a second chance, so the fight for survival helps bring them closer again. The performances from Butler, Baccarin and Floyd make this family feel real – there’s one moment where Alison becomes desperate and emotional and Baccarin’s performance just encapsulates what a mother being pushed to the edge would be like.

Greenland is a really tense and gripping disaster movie that puts one family at the centre of it. If you’ve watched Greenland, or like the sound of it, I’d definitely recommend The Wave and its sequel The Quake – two Norwegian disaster films that focus in on a few characters and their relationships as they fight for survival. 4/5. 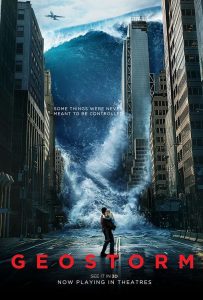 When a network of satellites designed to control and prevent extreme weather patterns starts to malfunction, it’s a race against the clock for its creator Jake Lawson (Gerard Butler) to figure out what’s going on in the space station, while his younger brother Max (Jim Sturgess) tries to figure out a conspiracy on Earth, before a worldwide Geostorm wipes out everyone and everything on the planet.

Let’s get this out of the way. Depending on your taste in films and your definition of “good” Geostorm isn’t necessarily going to be classed as “good”. However, it is enjoyable. Geostorm is in the same vein as Roland Emmerich’s disaster films like The Day After Tomorrow and 2012, but unlike 2012 which has some truly awful characters that you don’t care about, Geostorm’s cast does well with what they’re given and for the most part portray likeable (yet often cliché) characters with decent chemistry.

The special effects are a bit of a mixed bag. The stuff in space looks great from the various high-tech satellites and rockets to the space station itself, but it’s the extreme weather that doesn’t always looks so great, from tsunami’s to large hail stones to tornadoes, there’s every kind of weather imaginable. It’s when sequence focuses on a character experiencing the disaster like Cheng (Daniel Wu) trying to outdrive molten lava exploding from the streets of Hong Kong, that are tense and exciting. The effects are most noticeable with a tsunami that hits Dubai, especially because the tsunami that hits New York in The Day After Tomorrow, a film released over 10 years earlier, still looks a lot better.

Geostorm is entertaining nonsense. The conspiracy in of why the technology is going wrong and who could be behind it and why, is predictable a lot of the time but the speed of which the reveals and action happen helps you forget about that. It’s the perfect film to watch when you don’t want to think too hard but there’s still some intrigue and some exciting moments. 3/5.

When Secret Service Agent Mike Banning (Gerard Butler) is framed for the attempted assassination of President Trumbull (Morgan Freeman) he’s forced to go on the run, avoiding his own agency and the FBI, to uncover the truth and prove his innocence.

If you enjoy the previous films in this somewhat unlikely trilogy about a Secret Service Agent who is really good at killing people and rescuing Presidents, then there’s a good chance you’ll know what you’re getting into with Angel Has Fallen and will like this film too.

In comparison to the previous films in the series, Angel Has Fallen is noticeably less racist as it’s not outside forces that are out to get the President, and Angel Has Fallen attempts to be critical of America’s historic desire for war instead of using other methods when dealing with conflict first. President Trumbull wants to use military force as an absolute final measure in conflict, whereas other people in the White House take a different stance and that causes tension in Trumbull’s cabinet.

Angel Has Fallen is more character driven than the previous films in the series as it delves into Mike’s past and fleshes out his character more. The Mike Banning in Angel Has Fallen is an older, wearier Mike Banning than we’ve seen before. Mike has insomnia, headaches and dizzy spells as everything he’s put his body through over the past few years starts to catch up with him. But even though Mike has a wife and young daughter he loves very much, he doesn’t know how to quit the Secret Service and stop doing what he knows how to do best – killing people and protecting the President.

As Mike has nowhere to turn, he ends up finding his father (Nick Nolte) and their interactions are often very funny as they make a rather odd pair. They have so many similarities that they end up clashing often, and it’s these moments of levity that make the violence more affecting.

The “twists” in Angel Has Fallen are rather obvious and the CGI is notably ropey at times but with a compelling lead and solid action sequences with lots of explosions (the final act is fast-paced and thrilling), it is easy to overlook the flaws in Angel Has Fallen and have a good time with it. 4/5.

Mortal Bek (Brenton Thwaites) teams up with the god Horus (Nikolaj Coster-Waldau) to try and defeat Set (Gerard Butler), the god of darkness who has taken Egypt’s throne, enslaved its people and plunged the empire into chaos and war.

Gods of Egypt is not a good film. There’s so much wrong with it, the dialogue is awkward and sometimes cheesy, the action scenes are terrible and while it might have a lot of big, shiny things, the CGI can’t really save the film.

Let’s talk about the dialogue. From the first scene with Bek and his girlfriend Zaya (Courtney Eaton) their whole conversation is clunky and is a full-on info dump. From there it doesn’t get much better. There’s some quips when I think were supposed to be humours but not as funny as I found them – they were so cheesy and said at a really inappropriate time.

Then there’s the fight scenes. Some aren’t so bad, and the special effects on the Egyptian gods sometimes looks pretty cool, but then others are just awful. There’s the slow-mo pans around a character as he leaps towards someone, it honestly looks like the actor has been told to hold a couple of fighting poses and the camera, editing and VFX teams will do the rest.

I can’t not mention that a film set in Egypt, about Egyptian gods, has very few people of colour in it – especially black people. I feel like the scene where there’s a hundred Thoth’s (Chadwick Boseman) walking around is some sort of weird attempt to level the playing field.

All in all, Gods of Egypt is a dull and predictable film, though it does manage to sometimes looks pretty and sparkly. 1/5.