Top Ten Tuesday is a feature run by BrokeAndBookish each week – I’m thinking I might not take part every week but just see if a week takes my fancy. In honour of Halloween, which I don’t really do anything for, here are some creepy books you might want to check out if you’re in the mood for a scare.

Poe by J. Lincoln Fenn
There’s supernatural elements in Poe as well as the standard stuff of having a creepy old house full of secrets, a séance and a possible psychotic murderer. Poe may be creepy but it also does a great job in adding humour to make the creepiness bearable.

The Strain by Chuck Hogan and Guillermo del Toro
If you’ve seen the TV show, you’ll know what The Strain is about. The thing about the book is it starts with this plane that’s completely silent and the atmosphere in the airport is suffocating. From there it never really lets up, there’s the vampire like creature, the graphic description of peoples bodies changing – the whole thing really sets your teeth on edge.

172 Hours on the Moon by Johan Harstad

I don’t want to say too much about it because it’s one of those books that’s best to go in blind but it was another creepy book that gave me goosebumps. I liked the tension and sense of foreboding throughout the novel and when the weirdness starts to happen, you don’t know what to believe. END_OF_DOCUMENT_TOKEN_TO_BE_REPLACED

This past year I’ve been to the cinema 63 times so narrowing all what I’ve seen to my top ten has been a bit difficult to say the least. When I first went through my Films of 2014 list I narrowed it down to 16 – getting rid of six films from this list was hard so they are my honourable mentions.

Honourable mentions:
12 Years a Slave
Don’t get me wrong this film is amazing but I saw it January, it really affected me then but I have never felt like I wanted to see it again.
Locke
Tom Hardy is incredibly in Locke but it is a slow moving film.
The Purge: Anarchy
Frank Grillo is totally badass and awesome in this and it was the perfect audition to play The Punisher… if he wasn’t already Crossbones in the Marvel Cinematic Universe that is
Lilting
Lilting is such a sweet yet heart-breaking film and both Ben Whishaw and Pei-pei Cheng are brilliant.
Fruitvale Station
It starts like a punch to the gut with the real footage of the incident on the station platform. Michael B. Jordan’s performance is brilliant and Fruitvale Station is all the more important and sad because what happened to Oscar Grant is still happening today in America.
Begin Again
The music’s wonderful (listening to the soundtrack on repeat got me through my dissertation), the characters are all flawed but ultimately likeable.

Now for the top ten, these are all very close and really they could probably be in any order but here we go!

10. Belle
Belle is a brilliant period drama that’s led by Gugu Mbatha-Raw who gives a great performance as a woman born into wealth and status but isn’t seen as one of the elite due to the colour of her skin. The supporting cast is also great and it’s a beautiful film.

9. 22 Jump Street
It’s very rare that a sequel is better than the first film, especially when it comes to comedy sequels, but 22 Jump Street is brilliant. I love the meta and how self-aware it is and Jonah Hill and Channing Tatum are the perfect duo.

8. Dawn of the Planet of the Apes
It’s political, it’s a family drama, it’s about survival and the performances and animation are incredible. END_OF_DOCUMENT_TOKEN_TO_BE_REPLACED

Top Ten Tuesday is a feature run by BrokeAndBookish each week – I’m thinking I might not take part every week but just see if a week takes my fancy. I read a lot more this year than I thought I would and a lot of what I read has been really good. So this weeks Top Ten Tuesday is the perfect time to look back at what I’ve read and pick out some highlights. I reviewed some of these books I’m going to mention, so if it you want to find out more about what I thought – just click the link and you’ll get to my review!

Young Avengers really kicked off my comic book reading this year. I had read a few volumes towards the end of last year but this year I’ve read a lot. Young Avengers is a lot of fun and the story arc was very easy to get into even though I only knew one or two characters from the team before I started reading it. If you like teenage superheroes saving the world while having relationship dramas and having great banter – Young Avengers is for you.

Vicious – V.E. Schwab
I’m always intrigued about people with powers and I loved the take on that in Vicious. All the characters are interesting and no one is just a cardboard cut-out of a hero or villain. END_OF_DOCUMENT_TOKEN_TO_BE_REPLACED

Nick Dunne (Ben Affleck) is (sort of) happily married to Amy (Rosamund Pike) but then on their five year anniversary he comes home to find the house trashed and Amy gone. Soon he along with family and the police are trying to find out what has happened to Amy, however it’s not long before the media’s suspicion falls onto Nick – as it is always the husband that kills the wife.

Gone Girl is directed by David Fincher and its screenplay is by Gillian Flynn, the author of the source novel. It is a very faithful adaptation and fans of the novel will be happy as the rumours of the ending of the film being different to the book are not true – or at least I didn’t notice a difference and I only read the book a few months ago. Flynn has successfully slimmed down her chunky novel to two and a half hours, cutting out scenes and characters that aren’t vital. However that two and a half hours run time can still feel a bit long and some parts do drag a bit.

The film is told in two perspectives. Nick’s perspective is in the present during the police investigation and media hoopla surrounding Amy’s disappearance, while Amy’s is in the past when she and Nick first met, leading up to the months before her disappearance. The jumps between the two perspectives are a bit jarring to start with but you soon get used to it and seeing how Nick and Amy’s relationship progresses adds to the tension and the suspicion of the present day investigation.

END_OF_DOCUMENT_TOKEN_TO_BE_REPLACED 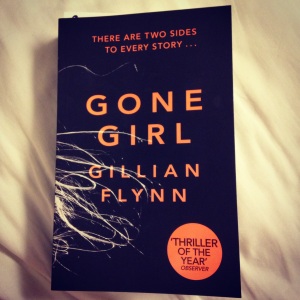 Nick Dunne is (sort of) happily married to Amy but then on their five year anniversary he comes home to find the house trashed and Amy gone. Soon he along with family and the police are trying to find out what has happened to Amy, however it’s not long before the suspicion falls onto Nick – as it is always the husband that kills the wife.

Gone Girl starts off slow and sort of predictable as there are all the usual tropes you expect to find with crime scenes and police investigations thanks to the influx of cop shows we’ve all watched. However, it soon starts turning the tropes on their head and there are twists and turns that you don’t suspect that causes Gone Girl to become incredibly tense and thrilling.

The story is told from two perspectives. There’s Nick and what’s happening in the present as he goes about his day before finding Amy missing and then the following police search. And then there’s Amy’s story which is told in the form of diary entries from when she first met Nick seven years ago. It’s fascinating seeing the correlation between Amy’s diary entries and Nick’s memories of those events.

The thing I found most interesting about Gone Girl is the fact that Nick is an unreliable narrator and you don’t know whether or not to trust him. I don’t think I’ve read anything from an unreliable narrator before and it’s a very unsettling experience and really adds some tension to the story. There’s a line that really surprised me (it’s the last line on page 42) and that’s when I knew that this book was going to be interesting. That being said there’s a point about half way through when suddenly the story shifts and I was just reading in shock and my brain couldn’t really comprehend where this story was now going. But that was great! Don’t think I’ve been that surprised by a plot development in ages.

Both Nick and Amy are fascinating yet somewhat unlikable characters in some respects and as you see both their sides of the story there are things that don’t match up and you’re not sure who to believe. The ending was completely unexpected but at the same time it suited the characters and the story almost perfectly.

I can’t recommend Gone Girl enough and it’s definitely a story you can’t stop thinking about. The movie also looks brilliant and say what you want about Ben Affleck as Batman but I think he’s going to be an amazing Nick Dunne. While Gone Girl is a bit slow to start it is incredible with all its twists and turns and thoroughly deserves 5/5.