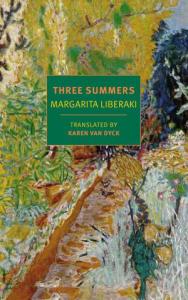 Living in a big old house surrounded by a beautiful garden in the countryside outside Athens are Maria, the oldest sister, as sexually bold as she is eager to settle down and have a family of her own; beautiful but distant Infanta; and dreamy and rebellious Katerina. Over three summers, the girls share and keep secrets, fall in and out of love, try to figure out their parents and other members of the tribe of adults, and worry about and wonder who they are.

The majority of Three Summers is told from Katerina’s perspective and in the first person. Though there are the odd chapters from other characters perspectives, mainly the other two sisters, and those are written in the third person so it’s easy to tell when you’re momentarily stepping away from Katerina’s viewpoint.

Three Summers is set in the 1930s before the Second World War and the sisters do all seem to live an idyllic life. At the start of the novel, so during the first summer, they are twenty, eighteen and sixteen. They spend their time lying in the fields, talking to one another about their thoughts and dreams, and also generally getting the attention of the young me they know. They also think about their separated parents and other family dramas. They live with their mother, aunt and grandfather while their father, who is both a banker and an inventor, lives in Athens.

I found Three Summers quite slow going. At times that suited the story as it evokes the feeling of lazy summer days where the days blur into one, but on the other hand it made it more difficult to connect with the characters and on the whole I didn’t really care about them.

Maria was the sister that was the easiest to understand, she knows what she wants and decides who and when she’s going to marry quickly. Infanta is more reserved and at some points I wondered if she was written to be asexual or aromantic because of how distant she was towards the young man who clearly likes her. It could have been natural shyness or nerves but some of her reactions to strong emotions sometimes seemed more extreme for that. Katerina is more bold than her sisters and her curiosity and actions often made her mother despair. She doesn’t seem to fit in this family and while she does say she falls in love with a neighbour, it’s hard to tell if she really has and she’s not using him as a gateway to adventure.

The writing in Three Summers is quite flowery and paints vivid pictures of the old house and the surrounding countryside, but that sort of thing isn’t really for me and it wasn’t keeping my attention by the end of book. Maybe it’s because I did find myself skim reading the last section of the book, which was about the events of the third summer, but I did find it difficult to keep track of some of the friends and neighbours, how they were connected to the sisters and what they thought of them.

Because it’s set just across three summers and is more of a slice of life type story, there are some things that are open ended and potential relationships not yet pursued which is a little frustrating but that’s the nature of this kind of story. Three Summers is a coming of age story and it’s one that fans of period dramas may like a lot. It has the will they/won’t they relationships but with more of a stiff upper lip as young women weren’t allowed to be forthright with their wants in the 1930s.