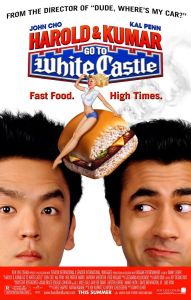 After getting high together, best friends Harold (John Cho) and Kumar (Kal Penn) embark on an epic quest to satisfy their desire for White Castle burgers.

I always thought that the Harold & Kumar films wouldn’t be for me as that kind of stoner American humour has never been my kind of thing. But I’ve been listening to You Can’t Be Serious, Kal Penn’s memoir, and the way he talks about these films, Harold & Kumar Go to White Castle especially, made me want to check them out. Sure, I had Penn’s love for them and his fun anecdotes about filming in mind when pressing play but he was right; Harold & Kumar Go to White Castle is something special and he has every right to be proud of it.

Harold & Kumar Go to White Castle is very funny. There are the stupid jokes that you can see coming from miles away but they still mostly land thanks to the two leads, but there are also jokes that play with racial stereotypes in a really fun and clever way. Even though Penn had talked about how much he liked the script and how it wasn’t anything he’d experienced before as an Asian American actor, I still wasn’t expecting the racial politics of a stoner comedy to be so perceptive and for it to still, for the most part, hold up seventeen years later.

With a tight 90-minute runtime, the jokes and the escapades never stop coming. Honestly, it’s impressive how there is never a dull moment. Things just keep happening to Harold and Kumar that stops them from getting to White Castle, instead they get a flat tyre or get carjacked or end up in hospital. Anything that could go wrong for them does and it manages to be funny and unrepetitive.

The chemistry between Cho and Penn is what helps elevate what could’ve been a generic stoner movie. The two of them bounce off one another perfectly, feel like real friends and the juxtaposition between straightlaced officer worker Harold and slacker Kumar works because it never goes too far in either direction. They both are funny and neither are vilified for caring about work or not caring about work.

Harold & Kumar Go to White Castle really was an unexpected delight. It’s laugh out loud funny and even when a joke doesn’t land or is too cringey for today’s standards, something else soon happens to make you forget any misfires. 4/5.