In 2019 I watched a lot of films but not too many that I got overwhelmed with meeting a self-enforced target. In total I watched 242 different films, 251 films including rewatches. I saw 76 films at the cinema as well. I have a full list of all the films I watched here and I also put together a list of my Top Ten Favourite Films of 2019 last week for your reading pleasure – I’d recommend all of my favourites to anyone, no matter their taste in films.

With the film-related goals I set myself it was a bit of a mixed bag. One of the reasons I wanted to not put pressure on myself to watch films every day and hit a ridiculously high target, was so I could watch the many TV shows I’ve missed or got half way though and not feel guilty about it. In the end I didn’t watch many TV shows at all. In fact, I watched one and a half. I watched all of Stranger Things season three which I loved and binge-watched over a weekend. You can see what I thought on Twitter as I did some spoiler-free live-tweeting. I also started to rewatch Shadowhunters as the last series came out so thought it would be nice to rewatch it from the beginning and by the time I did that the new episodes would be out. It didn’t quite work like that because I’m someone who just stops watching TV shows even when I’m enjoying them. I got near to the end of series 2 so I only really have a season left to watch and half of it will be new to me. Maybe in 2020 I will finish my rewatch and live tweeting of one of my favourite shows.

I did complete the 52 Films by Women challenge once again. I watched 56 films directed by women (all of which happened to be first time watches) and I watched 71 films that were written by women. However, I didn’t watch very many of my unwatched DVD’s and Blu-rays, and in fact I bought more and now have over 80 unwatched films.

Now it’s time for the fun stats stuff. I have a Pro membership on Letterboxd which allows you to see all your film-viewing stats and I love it. 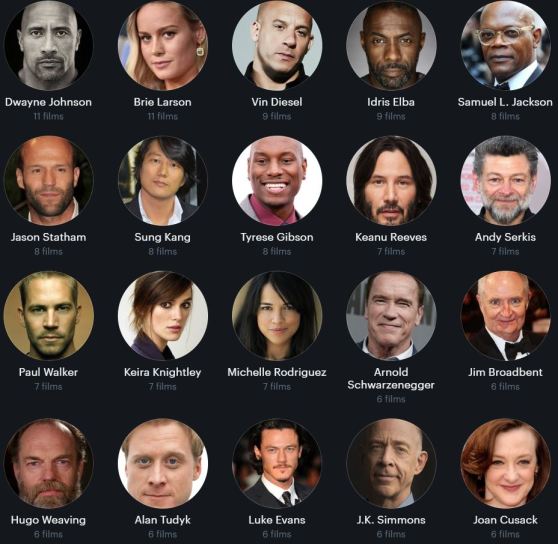 I rewatched and reviewed the Fast & Furious franchise (which I adore) so that’s why almost half the actors here are from at least one of those films. I made the effort to watch a lot of Brie Larson and Keira Knightley films so that’s why they’ve gotten a spot. I rewatched the sequel Star Wars trilogy, the Lord of the Rings, the Transformer trilogy and the John Wick trilogy so that explains people like Keanu Reeves, Andy Serkis and Hugo Weaving a couple of the other actors, but some people like Jim Broadbent and Joan Cusack were a surprise.

My most watched directors also show off the fact I watched a lot of Fast and Furious (Justin Lin), Star Wars (J.J. Abrams and Rian Johnson) and Transformers films (Michael Bay). I like how Antoine Fuqua makes an appearance once again (he’s one of my favourite directors) and I tend to rewatch his films fairly often. It’s a shame there’s only one woman on this list. I watched four of Mira Nair’s films that I hadn’t seen before but while I watched over 50 films directed by women, I think she was the only female director I watched multiple films from.

So what are my film-related goals of 2020? I’m going to continue to watch what I want, when I want, and not feel like I have to watch a film every day when I’d rather be reading or discover a new TV show (that I’ll only watch half of before stopping even when I’m enjoying it). I definitely want to finish watching Shadowhunters and if I manage to get through a couple of other TV shows that I’ve been meaning to watch for ages in 2020 that’d be great. I think The Alienist returns this year and as that’s like the one show besides Stranger Things that I’ve watched in its entirety recently, I’m definitely looking forward to that.

I want to complete the 52 Films by Women challenge for both directors and screenwriters again. I have been doing (and completing) this challenge since 2016 so it’d be cool to make it a fifth year in a row.

I will once again say I want to get my unwatched DVD’s and Blu-rays down. As I said, I have over 80 of them to get through but I do have a plan to tackle this! It is going to be related to the A-Z in April Challenge but more will be revealed in the Spring. I not only have a Clint Eastwood boxset to get through, but an Alfred Hitchcock one as well now so maybe I’ll make some headway with those this year.

Do you have any film-related goals for 2020? How easy/difficult do you find it is to make time to sit down and watch a film?

I have a Letterboxd account and it’s pretty great. Letterboxd is the movie version of Goodreads so you can log what you watch, write reviews, make lists and follow different users. If you get a Pro account (which is only $19 a year which is about £15 and I think that’s pretty good value to be honest) you get to see what your various movie-related stats are each year you log films and overall on all the films you’ve ever marked as watched.

I’ve been looking at which actors I’ve watched the most overall and there’s some interesting things there but it does make me want to try and change some of my viewing habits. 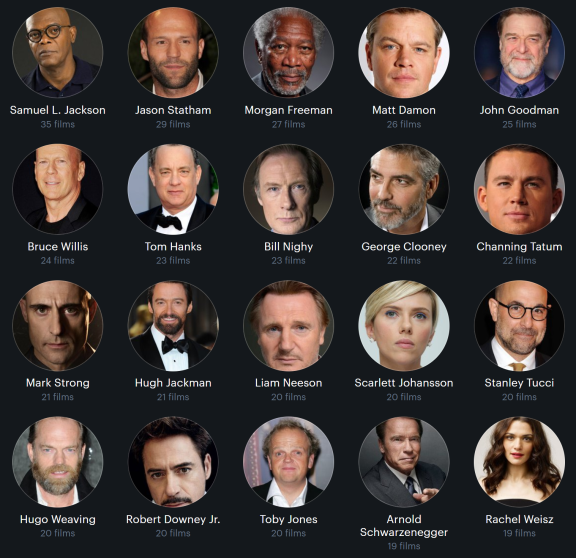 Out of my top twenty most watched actors, just two of them are women – Rachel Weisz and Scarlett Johansson. Scarlett Johansson was someone I was surprised to be there as she’s not one of my favourite actors nor someone who I’d go to see a film just because they’re in it. Her being in the Marvel Cinematic Universe certainly helped give her a boost and for a younger actor (she’s 32) she’s been in the business for a while and has an eclectic filmography. Rachel Weisz is a new addition because I have been watching more of her filmography recently, trying to get her (and more women in general) into my top twenty. In comparison to Johansson, Weisz is an actor who I love and will seek out films just because she’s in them but she usually stars in dramas or films that aren’t so mainstream hence while she is someone I do really like, her filmography isn’t always to my taste. END_OF_DOCUMENT_TOKEN_TO_BE_REPLACED