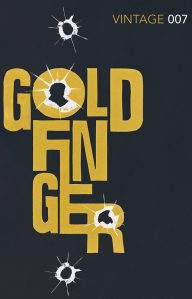 After the Secret Service is informed that the Bank of England’s gold is being stolen, 007 James Bond is put on the case to track down the mysterious Auric Goldfinger and find out how he’s been accumulating so much gold. But as Bond delves deeper, he discovers Goldfinger’s dangerous connections and that he has much bigger plans when it comes to gold.

While I have watched the film version of Goldfinger a number of years ago, enough time had past that I didn’t remember much of the plot, and even if I had the book was it’s own unique thing compared to the film adaptation.

After having the physical book on my shelves for years, I listened to the audiobook narrated by Hugh Bonneville who did a great job. Goldfinger is a fast-paced story and Bonneville did a great job at getting inside Bond’s head. The action sequences were exciting but the slower, spy stuff was just as compelling.

I love the character of James Bond in this story. He’s a mess, and an argument could be made for him being depressed when we’re first introduced to him in the opening chapters. He’s sick of his job, the travelling and the killing and he’s so very tired of it all. The thing I loved about Bond is that while he is a good spy, he is human and makes mistakes. Also, when times are tough and he’s in real mortal peril, his inner-monologue is emotional and reflective. James Bond also has a sarcastic sense of humour which I loved and there’s so many times he uses either wit or sheer luck to get by. For instance, at one point he blames a cat for something in the hopes that Goldfinger doesn’t figure him out.

Goldfinger and his trusted bodyguard Odd Job are both intimidating foes in different ways. Goldfinger is very smart while Odd Job is deadly. The language used to describe Odd Job and the other Korean workers Goldfinger employs is definitely racist and can be sometimes uncomfortable to listen to. I guess that’s the sign of the time it was written in.

The same it can be said of the way women are presented. Pussy Galore is a lesbian and the book states this multiple times. However, by the end it’s alluded to that she was only a lesbian because she hadn’t met a real man like James Bond yet. It’s eye-rolling stuff. That being said, while Bond is a self-confessed womaniser, there are moments, especially at the start of the novel, where it does show he can and does respect women. There may be some rather outdated views of them, but on the whole there’s less than one might expect from a James Bond story when all you’ve seen previously are the film adaptations.

I enjoyed Goldfinger far more than I was expecting to, to be honest. It’s a fast-paced thriller and Bond is much more interesting, funny and layered character compared to the almost archetype that’s seen in the various film adaptations. 4/5.

If you’re interested, as a part of my Bondathon three years ago I watched and reviewed the film adaptation of Goldfinger, along with every other Bond film. You can read that review here.