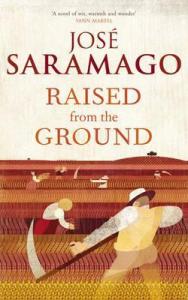 A multigenerational family saga set in twentieth-century Portugal. Raised from the Ground follows the Mau Tempo family, a family of poor landless peasants, as they try and make a life for themselves as national and international events take place around them. But nothing really impinges on their grim reality until the first communist stirrings in the country.

The way Raised from the Ground is written took me a long time to get my head around. It’s like there’s an omniscient and omnipresent narrator, telling the lives of the different members of the family as each generation grows up. This style means there’s no speech marks when people talk and there often are very long sentences with many commas in them. The long sentences aren’t so bad, it’s the paragraphs that are anywhere between a page long and four-pages long that cause problems. It is very easy to get lost in those long paragraphs.

The story itself is not memorable and the characters, of which there are a lot, are not well developed. When the story shifts focus from one character or relationship to the other, it’s hard to remember or keep track of who is related to who. While the first 80 pages or so are engaging, the dreary existence of this peasant family becomes repetitive and dull as there is little chance for them to better themselves. No doubt this is the point of Raised from the Ground, but a novel can’t just make a point, it must also be interesting and unfortunately this one wasn’t.

Raised from the Ground pans around sixty years and the verbose narrator also talks about events that happened before the books beginning multiple times. Across those years different national and international events are referenced (including two World Wars) and the little footnotes that explained a reference to an important event in Portugal was appreciated. Though the way the book is written, focusing so closely on one family’s struggles, meant that the historical context was never fully explained so the impact of these events on the family and their community was never really felt.

I’ve read multigenerational family sagas before and on the whole I rather enjoy them. However, Raised from the Ground is not one of the ones I enjoyed. The combination of the writing style and the story meant I often felt my eyes glazing over. I did like the little titbits of Portuguese history speckled throughout the novel, though there wasn’t enough of that to keep me interested. 1/5.