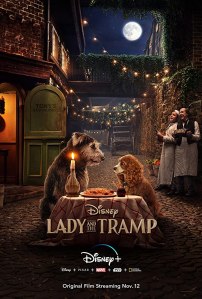 It seems like every classic animated Disney film will eventually be given a live action remake and 1955’s Lady and the Tramp is one of the latest to get the treatment.

While I’d watched the animated Lady and the Tramp many times as a child, it’s one that hadn’t really stuck in my mind so seeing this version made the story a new experience. Lady and the Tramp is the story of sheltered uptown Spaniel Lady (Tessa Thompson) and streetwise mutt Tramp (Justin Theroux) who meet when Lady’s life is disrupted by a new arrival.

If I had to pick one word to describe Lady and the Tramp, it would be charming. The costumes, the setting and score, it’s all so quaint. It’s also a charmingly familiar story even if you’ve not seen the animated film before. There’s something comforting about a story where you know what’s going to happen and the various character types – both human and dog in this scenario.

The combination of real dogs and CGI works very well here and isn’t uncanny valley like the “live action” aka completely computer-generated version of The Lion King. The animals are cute and the way their mouths are animated to move when they talk is easy to get used to especially with dogs like Tramp and Jock (Ashley Jensen) who have hairier and shorter muzzles.

Thompson and Theroux’s vocal performances are delightful, though it’s perhaps Janelle Monáe as Peg who really stands out. She sings a jazzier version of “He’s a Tramp” that’s great. Speaking of songs, the culturally insensitive “Siamese Cat Song” is not here, instead the troublemaking cats (who are a different breed to Siamese) sing a new fast paced song all about how they enjoy doing whatever they want.

The human cast are wonderful in their roles. Thomas Mann and Kiersey Clemons play Lady’s owners Jim Dear and Darling. Their romance is sweet and the drama in their lives compliments what is going on with Lady. The dogcatcher (Adrian Martinez) has a much larger role is and the main antagonist for Tramp. There are some fun sequences of Tramp taking the dogcatcher for a fool and the blend of animation and real animal in them is often near seamless.

Lady and the Tramp is perhaps more for children with some of its silly moments and jokes, but it’s still a film that adults can enjoy – whether they have nostalgia goggles on or not. 4/5. 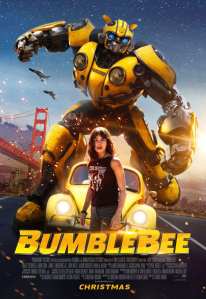 On the run in the year of 1987, Bumblebee finds refuge in a small Californian beach town. Charlie (Hailee Steinfeld), on the cusp of turning 18 and trying to find her place in the world, discovers Bumblebee, and tries to keep him out of the hands of the US military.

I’ll be honest, the first Michael Bay Transformers film is one of my go to comfort films and I really enjoy it. The rest of the films in the series are varying degrees of quality to say the least and I was very apathetic about The Last Knight. But I’m happy to say Bumblebee is like a breath of fresh air compared to the latter Bay films.

Bumblebee’s plot is so much simpler compared to some of its predecessors, and that allows the story to build on the characters and their relationships naturally. There are two Decepticons (voiced by Angela Bassett and Justin Theroux) searching for Bumblebee who enlist the US military to help them search for them. The main guy in the army you follow is Agent Burns (John Cena), he’s very much a shoot first, ask questions later kind of guy but weirdly, probably due to Cena’s charisma, the way he delivers jokes is more entertaining and almost more believable than the tough guy persona.

Hailee Steinfeld is wonderful as Charlie. She’s a bit of a loner and she’s even an outsider in her own family as she doesn’t feel like she fits in any more. Charlie is smart and caring and her relationship with Bumblebee is wonderful.

Bumblebee is charming and does a brilliant job of combining heart with spectacle. Like the previous Transformers films, there’s still battles between Autobots and Decepticons but this time the characters on both sides are seriously stripped back leaving those who are present more room to grow. When there are fights between robots, they’re easy to follow and entertaining.

It’s perhaps a bit on the nose with the 80’s inspired soundtrack, but that doesn’t make it any less enjoyable. The music is like a comforting hug and that, along with a story about a kid and an otherworldly creature, makes Bumblebee feel familiar and heart-warming. There are similarities to be made between Bumblebee and E.T. and The Iron Giant, both in terms of the plot but also because at its core is a wonderful friendship between a young person and a powerful creature.

Bumblebee is such a fun and lovely film, with so much heart and humour, that it feels almost old-fashioned in the best possible way. 4/5.