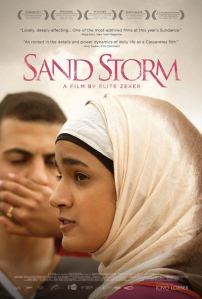 When a Bedouin patriarch Suliman (Hitham Omari) takes a second bride, his first wife Jalila (Ruba Blal) struggles in her new role while their oldest daughter Layla (Lamis Ammar) strives for her independence.

Sand Storm is a riveting film. While it seems like a small family drama, it’s scope is much bigger as it’s an insight into a culture that will certainly be unfamiliar to many people. While it might be a culture that’s somewhat unknown, the themes Sand Storm deals with certainly aren’t. Modernity vs tradition. Freedom of choice vs family duty. It’s painful to see these women faced with these dilemmas but at the same time it’s inspiring to see their strength and love for one another.

The conflict between Layla and her mother feels incredibly real. Layla wants to choose who she falls in love with and get an education and while at first it seems her mother is standing against her for the sake of it, you soon realise it’s because she wants her daughter to be safe. The way their relationship develops into a mutual understanding, with so much of it left unsaid is beautiful really.

Tasnim (Khadija Al Akel) is one of Layla’s younger sisters and while she’s a lot younger than Layla you can already see how fiercely strong-willed she is. She enjoys being outside with the goats, wearing jeans rather than dresses and the moment she begins to see what her future is likely to hold is a bitter pill to swallow.

Sand Storm is a touching tale, it shows the everyday life of this family and it’s through the mundanities of their life that you become connected to them, wanting them to get what they want in life. Sand Storm is a thoughtful and memorable film due to the great rapport between its characters and some touching performances. 4/5.