A prequel to the original X-Men trilogy, X-Men Origins: Wolverine shows the early years of James Logan (Hugh Jackman) who would one day become the Wolverine.

X-Men Origins: Wolverine tries to cram a lot in and very little of it works. A big part of this film is the relationship between Logan and his brother, Victor Creed (Live Schreiber). How they are each other’s only family until Victor’s violent streak gets too much for Logan and they go on different paths. Schreiber, and his creepy/gross nails, does look like he’s having a good time playing a villain that’s one step away from moustache-twirling. But the film never really delves into the hows and whys of the character instead having it pretty black and white – Logan = good while Victor = bad.

There are a lot of new mutants as a part of the team, led by Stryker (Danny Huston), and I couldn’t tell you any of their names – except Wade Wilson (Ryan Reynolds). X-Men Origins: Wolverine is possibly the most derided X-Men film and a big part of that is because of its treatment of that character and what it turned Deadpool into. God bless Ryan Reynolds for sticking with it and getting a Deadpool movie made seven years after this one made the character unrecognisable. The other members of the team aren’t given much more than the barebones of a personality and most are quicky killed off.

Gambit (Taylor Kitsch) makes his one and only appearance in the entire X-Men franchise
(so far) and he really is a bright spark in this otherwise dull film. He’s probably got less than 10 minutes of screen time, and he doesn’t appear until an hour into the film, but Kitsch still manages to bring more charm and charisma in that time than Hugh Jackman does in the whole film.

Speaking of Jackman, considering how layered his performance as Logan in previous films was and how it looked like he was giving a good performance even if the script wasn’t great (looking at you X-Men: The Last Stand) here he looks like he’s checked out of it and doesn’t really care anymore. That may be down to the poor script or the fact he’s supposed to be playing a slightly different Logan than the one we’ve seen before, one who remembers the 100+ years of his life so is more weary due to the things he’s seen or done. Either way, it’s not a great performance.

There’s a lot of X-Men Origins: Wolverine that feels contrived because it’s a prequel. There are things like where Logan gained the moniker Wolverine and even where he got his cool, brown leather jacket – were we really desperate to know that? – and often it seems unnatural as the film screeches to a holt so you pick up this obvious reference. Then there’s a problem that prequels often fall into – you have a good idea of how the story is going to end. If you’ve seen the original trilogy (which you probably have) then you know Logan is “experimented on” and he must lose his memory by the end of the film. If the stuff leading up to that was more compelling maybe Logan’s amnesia would then be bittersweet as a viewer as then what he’d lost would be more affecting but it’s not.

The CGI in X-Men Origins: Wolverine is so bad. I’m one to forgive some shoddy CGI if it’s just in one scene or the rest of the film in terms of plot and characters is good and entertaining, but as X-Men Origins: Wolverine doesn’t meet those requirements it’s worth mentioning. The most noticeable thing is Wolverine’s claws. Obviously, they aren’t real but they look so fake and far worse than they did in X-Men which was released nine years earlier. They look stuck on Logan’s hands rather than a part of the characters body.

X-Men Origins: Wolverine is pretty much one fight/action scene after another, and it gets boring pretty quickly as none of the characters Logan goes up against (besides Gambit) have much of a personality or a compelling story arc – and the actual plot of the film isn’t that entertaining either. 1/5. 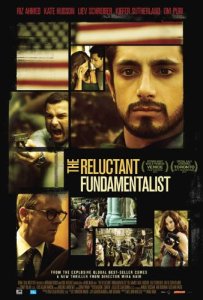 In 2011 Changez (Riz Ahmed), a young Pakistani man, tells his story to journalist Bobby Lincoln (Liev Schreiber). How as he chased corporate success on Wall Street, he found himself caught up in the conflict and tension in a post-9/11 world.

The Reluctant Fundamentalist is told through flashbacks. In the present Bobby tries to figure out whether or not Changez had anything to do with the kidnapping of an American academic as tensions rise between Pakistani students and police and the CIA are never far away. And in the flashbacks Changez is living the American Dream, he has a lucrative job on Wall Street and he is dating photography artist Erica (Kate Hudson), until that dream starts to crumble after the 9/11 terrorist attacks.

The harassment that Changez goes through in New York just because of the colour of his skin is tough to watch and is a harsh reminder that little has changed in the world today. It highlights how people are so quick to judge and make assumptions and how dangerous those assumptions can be – not just for the target of those assumptions, but the people around them too.

Riz Ahmed is brilliant as a young man, struggling to consolidate the different sides of him. He has such a strong presence and nearly every single shot of the film has him in it. You find yourself hanging off his every word as he tries to explain himself and find what makes him happy. 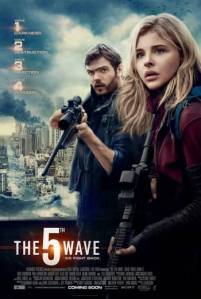 The world is being invaded by aliens causing increasingly deadly attacks and those left alive don’t know who to trust. When Cassie (Chloë Grace Moretz) is separated from her little brother Sam (Zackary Arthur), she’ll do anything to get him back.

The 5th Wave is the big screen adaptation of the YA book of the same name by Rick Yancey. I read the book a few years ago and really enjoyed it, though I wasn’t a fan of the sequel and I have yet to get around to reading the final book in the trilogy, so I was interested in seeing this adaptation.

Chloë Grace Moretz is brilliant at Cassie. She has to carry pretty much the majority of the film and she does a great job, especially the scenes with Zackary Arthur, they really sell their sibling relationship. Cassie is an interesting character because she’s had to grow up a lot but she’s still a teenager whose whole world has completely changed. When she meets Evan (Alex Roe) she’s in need of help but that doesn’t mean she wants to accept it.

There is naturally a romance angle in The 5th Wave, it’s not terrible but there’s not exactly sparkling chemistry between Cassie and her love interest.

The film is a bit disjointed when it stops solely following Cassie and then introduces Ben (Nick Robinson) as a main character. Ben’s brought into the army led by Colonel Vosch (Liev Schreiber) and there he, along with hundreds of other kids, is trained to kill the aliens, or as they call them the Others. His side of the story is interesting though a little predictable, even if you haven’t read the book.

The 5th Wave is a decent adaptation while still being an interesting and sometimes exciting sci-fi film. It does drag at times and is a little cheesy, but the fights and shootouts are generally quite good. 3/5.

The true story of how journalists at the Boston Globe exposed the massive scandal of child molestation and cover-up within the local Catholic Archdiocese.

When the Boston Globe’s new editor Marty Baron (Live Schreiber) takes over, he tasks the papers investigative team Spotlight to look into claims that the Catholic Church knew about child abuse by priests and had covered it up for decades. This starts a somewhat hesitant investigation to begin with – Boston has a large Catholic populace and the Church is a powerful entity – but as they begin meeting victims of abuse and a lawyer (Stanley Tucci) who will keep fighting for the victims, they realise that they have discovered something huge.

Spotlight is truly an ensemble film. There is no real lead as these journalists are a team, fighting for the same cause. You believe that these people have been working with each other for years and understand how each other tick. Walter ‘Robby’ Robinson (Michael Keaton) is the head of the team who knows some of the top dogs that might have been involved with the cover-up while Sacha Pfeiffer (Rachel McAdams) looks out for the victims and wants them to know how important their stories are. Mike Rezendes (Mark Ruffalo) gets increasingly more passionate about justice as the case progresses and Matt Carroll (Brian d’Arcy James) is the guy who looks for minute details to make sure the story is water-tight. They all give great performances as people who are often shocked and dismayed by what they uncover.

The way Spotlight is shot and the lack of showy performances makes it sometimes feel like a documentary, that you are watching these real people struggle with their findings and their desire to expose the truth. The script should be commended as well, there’s no quips and there’s only one real loud argument but that doesn’t stop the film from being captivating.

Spotlight does a great job of not sensationalising this chilling story. It shows that the legwork of investigative journalism often takes months of research and interviews but that doesn’t make it any less tense and thrilling. It also doesn’t talk down to the audience, it expects you to keep track of all these people they’re investigating and talking to and to make the connections yourself.

Spotlight is a gripping and important true story that everyone should see. 5/5.