Top Ten Tuesday is a feature run by BrokeAndBookish each week – I’m thinking I might not take part every week but just see if a week takes my fancy. Where has this year gone?! As we’ve only got a few weeks left, here’s the ten books I’ve loved the most this year. In June I talked about my favourite books I’d read so far this year so if you want to know about some other awesome books and to see which ones made both lists shimmy over here.

For once I’ve put these in order, going from ten to my number one book of the year.

10. The Girl on the Train by Paula Hawkins
I love me some thrillers with unreliable narrators and The Girl on the Train certainly has that! I loved how Rachel wasn’t reliable or even likable a lot of the time and it was one of those mysteries that left me guessing till the gripping finale.

9. Fear and Loathing in La Liga: Barcelona vs Real Madrid by Sid Lowe
Barcelona and Real Madrid’s rivalry is legendary and Fear and Loathing in La Liga delves deep into both clubs history and looks at Spain’s history too. This was a fascinating read, it was sometimes a bit dense and a little dull when it was talking about players I didn’t know about but on the whole it was great read.

8. A Monster Calls by Patrick Ness
I thought A Monster Calls was just a children’s book and I was so wrong! Yes it has illustrations and is about a young boy but it deals with grief and death and abandonment so well. It really makes you think and the beautiful passages go so well with the often scary drawings.

END_OF_DOCUMENT_TOKEN_TO_BE_REPLACED 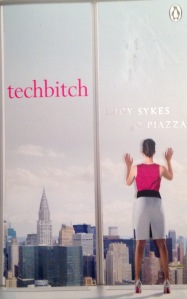 Imogen Tate arrives back to work after a period of sick leave at Glossy Magazine to find her former assistant Eve sitting at her desk – the desk for the editor of the magazine. A lots changed while Imogen’s been away and now her fashion magazine is being turned into an app. It’s a case of adapt or die for Imogen as she struggles to learn the new technobabble and deal with Eve who seems to have her own agenda.

Techbitch is a lot of fun. There’s some laugh out loud moments and some great secondary characters that often say exactly what you’re thinking. Ashley, Imogen’s assistant, was great for this and was generally a fun character. There are some cringey moments in Techbitch and some things happened which I expected there to repercussions for but then there wasn’t which was a surprise and a bit odd.

Eve really is a bitch. There’s a few sections of the book that are from her point of view which helped you understand her more and at some points you almost sympathise with her but there’s no excuse for the majority of her actions.

I found Techbitch fascinating because it’s a very realistic scenario. Print magazines and newspapers are an endangered species due to the Internet and smart phones and it’s quite easy to imagine people who are too set in their ways to try and adapt, ending up being forced out and replaced by younger more tech-savy people.

Imogen is a great lead character. She’s in her forties and has never really tried or bothered to learn the most basic of Internet skills – as someone in their twenties whose grown up with the evolution of technology and the Internet, Imogen’s complete lack of knowledge is surprising and frustrating. But Imogen is smart and resourceful and she adapts way more than both I and she ever thought she would. She’s a bit of an inspirational character in some ways as she has a husband, two kids and a job she loves and is successful in – the role model for any young woman who wants to be able to have it all.

Techbitch is classic chick-lit but that doesn’t make it bad, it’s funny with a great lead character and an interesting commentary on work in the digital age. 4/5.

The Friday 56 is a weekly meme hosted by Freda’s Voice. The aim is to share a few sentences of a book (whether it’s the one you’re currently reading or not) so other people might be enticed to pick it up.

“I adore the fact that my wife still comes home smelling like tequila after twelve devoted years of marriage to me,” he mumbled, rolling to face her and pulling her hand up to his lips. “Have you had a day?” he mumbled through her fingers. Ever since the surgery Alex had stopped asking her “How was your day?”

WWW Wednesday is a weekly meme hosted by Taking on a World of Words. It’s a simple meme where you just have to answer three questions:
– What are you currently reading?
– What did you recently finish reading?
– What do you think you’ll read next?

I think it’s a great way to share my recent reads as my reviews are always way behind what I’m actually reading.

So here’s my answers!

What am I currently reading?

Crash and Burn by Michael Hassan
I’m not sure what I think about this book at the moment. Crash is telling the story leading up to when Burn takes their school hostage and how Crash stopped him and saved the school. There’s certainly a gallows humour in it which is weird for a book about a school shooting and I am intrigued about both Crash and Burn but at the same time the characters aren’t that likable. I’m half way through it now so I kinda feel like if I give up on it now I’ll have wasted so much time on it – I guess I’ll keep powering on.

What did I recently finish reading?

X-Men: Days of Future Past by Chris Claremont and John Byrne
While the actual Days of Future Past storyline was only across two action packed and fast paced issues, the rest of the collection had the lead up to that event so you knew more about the characters and the stakes that they’d be facing. I’m glad I’ve now read this iconic comic.

What do I think I’ll read next?

Techbitch by Lucy Sykes and Jo Piazza
I saw this book in WHSmith and had to pick it up. Mainly because the similarity between the front cover and the Fifty Shades of Grey movie poster made me smile and I hope that’s been done deliberately. It’s all about how social media and the internet is changing the magazine industry and as someone who works in PR I’ve seen those changes and how some embrace them and some resists them so I’m interested to see what the main character in this does to survive the changes.