Secret Avengers is one of my favourite comics in the year or so I’ve been reading them. I first picked it up because I knew the majority of the characters thanks to the Marvel Cinematic Universe and the Avengers: Earths Mightiest Heroes TV show so figured it was a pretty good place to start in the vast world of Marvel comics. Also it has Hawkeye in it and I’ll pick up anything that features Hawkeye. 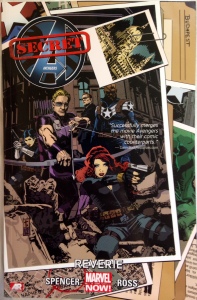 I haven’t read Ed Brubaker’s or Rick Remender’s story arcs yet. Instead I started with Nick Spencer and Luke Ross’s run, because that’s the one that featured the most characters I already knew about. I did find their run a bit confusing as the main story was to do with memory wipes and you never knew entirely what was going on but I liked be art and the relationships between various characters – especially Nick Fury and Phil Coulson’s friendship.

That story arc came to an end in the middle of last year and then the series was taken over by Ales Kot and Michael Walsh and now Secret Avengers is definitely my favourite comic book series. END_OF_DOCUMENT_TOKEN_TO_BE_REPLACED