Top 5 Wednesday is a great feature created by GingerReadsLainey and hosted by ThoughtsonTomes. To find out more about Top 5 Wednesday and the upcoming topics, check out its Goodreads page. This week it’s all about your favourite non-traditional written books, so graphic novels, comics, manga, audiobooks and so on and so forth. So, this week I’m writing about my favourite graphic novels/trade paper backs (because I don’t live near a comic store so it’s easier to read the volumes) and by pure chance they are all from different publishers. In no particular order they are… 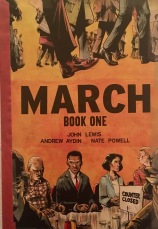 March by John Lewis, Andrew Aydin and Nate Powell
This graphic novel trilogy was pretty much the first thing I read this year and it’s my new favourite thing ever. It’s all about the Civil Rights Movement in America and it’s told through John Lewis’s eyes, what protests he was involved in, who he knew and all the hardships and successes. It is such a powerful and important graphic novel series, the sort of thing everyone should read.

Five Ghosts by Frank J. Barbiere and Chris Mooneyham
Five Ghosts has a very Indiana Jones feel, especially as the main character is an archaeologist who searches for weird mystical artefacts. Oh, and he also happens to have a stone stuck in his chest that gives him the power of five different ghosts. The thing about Five Ghosts I really love is the art style, it’s like those old pulp fiction stories and it can be creepy and dynamic, especially when the ghosts make an appearance.

END_OF_DOCUMENT_TOKEN_TO_BE_REPLACED

As World War Two rages across Europe, the Allied forces form a special team of the greatest heroines the world has ever known; Kate Kane, the all-American Batwoman, Diana of Themyscira, warrior Princess of the Amazons, Kara Starikov and Kortni Duginovna, defenders of Mother Russia and Mera, royal daughter of legendary Atlantis. With the aid of allies at home and abroad, this mighty women will turn the tide of war and defend those who cannot defend themselves.

Bombshells is brilliant. Even if you don’t know a lot about the characters featured into it, it doesn’t matter as the comic does a good job a setting them up and giving you all you need to know. Plus, as this story is set in World War Two, all the characters are a bit different to how you might expect them to be anyway. END_OF_DOCUMENT_TOKEN_TO_BE_REPLACED