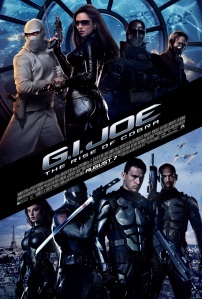 After their convoy was destroyed in an attempt to steal highly dangerous warheads, Duke (Channing Tatum) and Ripcord (Marlon Wayans) join an elite military unit comprised of special operatives known as G.I. Joe to help take down the evil organisation that’s after them.

I’ve watched G.I. Joe: The Rise of Cobra once before and that must be close to ten years ago as I remember recording it off the TV, so while I knew I had watched it, I really couldn’t remember much about it – besides the almost ridiculous cast. Also, I have never read a G.I. Joe comic, seen the cartoon or was even that aware of the action figures – here in the UK Action Man was the military toy I remember as a kid. So, whether or not this film is true to the characters and world of G.I. Joe I have no idea.

Let’s talk about the cast of G.I. Joe: The Rise of Cobra. There are a lot of great actors in this film though very few of them give great performances. Channing Tatum appears to be just going through the motions, and both Sienna Miller and Rachel Nichols were pretty bland too. Joseph Gordon-Levitt is near unrecognisable thanks to his costume and voice performance and Christopher Eccleston seems to be having a whale of a time as a Scottish weapons manufacturer with nefarious schemes. The Mummy alumni Arnold Vosloo and Brendan Fraser also make appearances, Fraser’s being very random and is more of a cameo. It’s like that all these actors don’t quite no where to hit it on the serious to fun scale of their performances so it doesn’t feel very cohesive. Plus, a lot of the characters get little to no backstory or characterisation besides stereotypes like “brash leader” or “tech guy” so it’s hard to get attached to any of them.

G.I. Joe: The Rise of Cobra has a lot of CGI-heavy action sequences and makes full use of the budget to show secret bases under the Sahara Desert and the polar ice caps. Some CGI shots look a bit ropey, mostly from the chase sequence in Paris, but on the whole it still looks decent if excessive – that underwater base with the submarine dogfights truly is something.

While the abundance of CGI and explosions gets old quickly, the sword fights between Snake Eyes (Ray Park) and Storm Shadow (Lee Byung-hun) stand out. The stunt work is great and while many of the other characters just seem to have super suits or big guns, these two actually have skills and with their backstories entwined, anytime they go toe to toe is a highlight in an otherwise bland action film.

G.I. Joe: The Rise of Cobra is very silly and mindless. As so many of the characters lack interesting or any characterisation, they aren’t memorable. The only two that aren’t so easily forgotten are Snake Eyes and Storm Shadow and part of that is due to the distinctive costuming. Otherwise, G.I. Joe: The Rise of Cobra is pretty forgettable and even as you watch it it’s easy to get bored. 2/5.