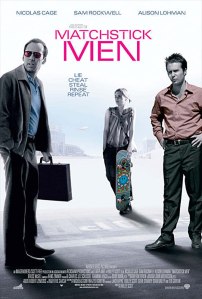 Phobia-addled and compulsive con artist Roy (Nicolas Cage and his protégé Frank (Sam Rockwell) are on the verge of pulling off a lucrative con when Roy’s teenage daughter Angela (Alison Lohman) shows up on his doorstep.

Matchstick Men is one of those films I’d heard of but knew nothing about the actual plot. I’d heard of it in the sense I’d seen it be mentioned as an underappreciated Nicolas Cage movie, and having now watched it I kind of agree. It’s really a hidden gem of a film when it comes to Cage and Rockwell and their performances.

But the real standout is Lohman. Gosh, she’s incredible and really holds her own up against Cage who she shares just about every one of her scenes. The relationship between Angela and Roy is so sweet and awkward as he is completely out of his depth talking to a teenage girl. He suddenly has someone else in his home, making a mess when he has everything clean and orderly, and it is clearly a struggle for him. They both have their issues with trust and letting each other in, but it’s clear from pretty much the outset that they care about one another.

While Matchstick Men is a sort of heist film and features a few different cons as well as the long con Frank and Roy are working on, it’s more about the relationships between the characters. The cons, while interesting and at times fun, take a backseat so the characters become what you’re invested in more than the con.

Like any good film with a con, Matchstick Men surprised me. It’s funny and weird at times thanks to Cage’s eccentric but never over the top performance, but it’s also sweet and kind of sad too. All the characters are looking for some sort of connection while also trying to keep their heads above water.

So yes, I join the ranks of calling Matchstick Men an underappreciated film. Whether you’re a Nicolas Cage fan, a Sam Rockwell fan, or a Ridley Scott fan because that’s who directed this odd but great film, there’s probably going to be something for you to enjoy here. 4/5.