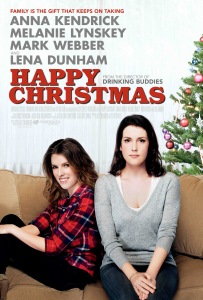 When Jenny (Anna Kendrick) breaks up with her boyfriend she moves in with her brother Kevin (Mark Webber) and his wife Kelly (Melanie Lynskey) who are raising their young son, turning their lives on their head as she’s not the most responsible person.

Happy Christmas is a low-key family drama that focuses on its leads and allows them the space to shine. It also features one of the happiest babies I’ve ever seen in a film. A lot of the interactions between the cast and the baby seem incredibly organic, as they react to his antics. It’s really sweet and true to life. That’s the thing about Happy Christmas, due to the script, how it’s shot and the cast, it feels like you’re a spectator in their day to day lives.

Jenny is an interesting character as she does little to endear you from the start, getting incredibly drunk and then being unable to babysit the next day, but she does slowly start to grow though she retains her selfish streak. Again, it great to see a character somewhat mature of a short space of time but they still retain qualities that are uniquely them.

Jenny’s relationship with Kelly is really the heart of the film. They are almost polar opposites in personality, but they find common-ground and begin to care about each other. Jenny teaches Kelly there’s more to her than being a wife and mother, and Kelly shows Jenny that good things can happen if you put more of an effort into life it can make you happy.

Happy Christmas is one of those alternate Christmas films. At its heart it’s about family and relationships, but nothing about the characters and their stories are too perfect or cliché. It’s a true to life comedy and it’s well worth the watch. 3/5.