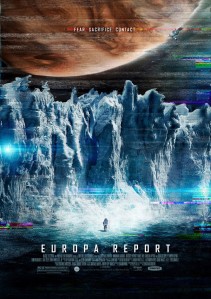 An international crew of astronauts set off on a mission to see if there is any life on Jupiter’s fourth largest moon, Europa.

Europa Report is a tense and claustrophobic film. This is in part to how 99% of the film is set on the space craft heading to Europa and all of this was filmed using cameras that were a part of the ship and the crews gear. In many ways it feels like you’re spying on the crew and it makes their lives seem very confined and limited. The reason there’s all these cameras on the craft is because the footage is being monitored and sent straight back to Earth so the whole world knows how the mission is going. So when there’s a probably with the uplink, the cameras are still recording but the footage isn’t being beamed back to Earth.

The surface of Europa looks beautiful and the whole film is well-shot. The found footage style filming, which sometimes includes some shaky-cam when taken from an astronaut’s helmet, is never hard to follow.

Europa Report is an intelligent science-fiction film. The way the characters deliver the technical jargon and the way the space craft looks makes the whole mission feel more real and plausible. This in turn makes any dangers the crew faces more threatening and unsettling.

The whole cast is great and all feel like intrepid explorers who want to achieve their mission to find life outside of Earth. However they also feel like real people who have become close after such a long time in confinement with one another.

Europa Report is a great film. It slowly racks up the tension as you learn what the crew has gone through in order to try and achieve their mission. It’s a film that’s an almost perfect blend of science-fiction, horror and thriller – an underappreciated gem. 4/5.