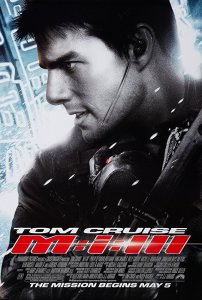 Ethan Hunt (Tom Cruise) is trying to balance his life as an IMF agent and his attempt at a normal life with his fiancée Julia (Michelle Monaghan) when manipulative arms dealer Owen Davian (Phillip Seymour Hoffman) who is set to steal and sell an item known only as the Rabbits Foot comes onto the IMF’s radar.

Mission: Impossible III is a good mix of intrigue, action and more emotional depth when it comes to Ethan Hunt. Ethan has semi-retired and is in love and wants to settle down with nurse Julia. While it would’ve been nice to see these two meet and fall in love, Cruise and Monaghan’s chemistry more than makes up for that. Also, Julia isn’t stupid, she knows there’s something up with Ethan and his “business trips” but she trusts him enough that he will tell her what’s going on with him when needed.

Phillip Seymour Hoffman is satisfyingly menacing as Davian. He’s calm under pressure and always seems to be a few steps ahead of Ethan and his team. Davian plays underhand, threatening people Ethan cares about including Julia, and is an intimidating presence even when he’s not on screen.

The action sequences are exciting, especially the showdown on a bridge. One of the main set pieces in Mission: Impossible III is when Ethan and his team infiltrates the Vatican. That sequence shows off all the spy tech and how good these guys are at their jobs. Mission: Impossible III definitely spaces out the action, instead focusing more on the characters and the idea there’s people at IMF that might not be trusted.

Mission: Impossible III is a good action flick with solid performances from Cruise, Monaghan and Hoffman. Ethan’s team does get left by the wayside during the final act and the Rabbit Foot is a McGuffin which causes the characters to act and it really is a surface level plot point. At its heart Mission: Impossible III is about Ethan and Julia and it’s probably the most character driven film of the series. 3/5.

Like Anne Hathaway, Michelle Monaghan is definitely one of my favourite actresses and one of those people that I will watch a film just because they’re in it.

I like all of the films I’ve ever seen Michelle Monaghan in. In fact she’s stars in some of my favourite films like Kiss Kiss Bang Bang (2005) and Source Code (2011). She was one of my favourite things about Mission: Impossible III (2006) because she was Ethan Hunt’s (Tom Cruise) wife who was a badass nurse/doctor (can’t remember which off the top of my head) and she totally saved his life – which I loved. I also quite liked what they did with her character in the following film.

I’ve said before that I’m pretty useless at watching TV shows and one of the many show I haven’t seen is True Detective. To be honest, even though everyone was hyping it up I really wasn’t that interested in it, that is until I found out during awards season that Michelle Monaghan stars in it. Now I’m definitely going to be watching it sometime too.