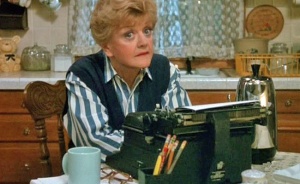 There is something so calm and soothing about Murder, She Wrote, even if dead bodies seem to appear wherever Jessica Fletcher goes. It’s a show I remember watching as a young child and is probably the thing that first introduced me to the murder mystery/crime genre. I’ve recently discovered that there’s a TV channel that often shows Murder, She Wrote nearly all day so it’s been fun having it back again as an easy watch kind of show.

Jessica Fletcher is a widow, former teacher, and a mystery novelist but probably most importantly she’s the best amateur detective the costal town of Cabot Cove has ever had. She’s smart, capable but also endearing and kind. The fact that she’s an older woman means she can talk to people and be more approachable than some of the actual detectives or police officers. She’s often unassuming so takes potential witnesses or perpetrators by surprise with her quick thinking.

I especially like it when she ends up in a big city and there’s a murder because how city cops often push her thoughts and insight aside often comes back to bite them. There’s just something almost therapeutic about an older woman outsmarting young men who think they know everything.

In true crime show fashion I love how it’s the smallest details or previous unconsidered conversation that sparks Jessica’s understanding of how a murder was committed and who did it. The way she pieces things together and then reveals all to the murderer and the police is always satisfying.