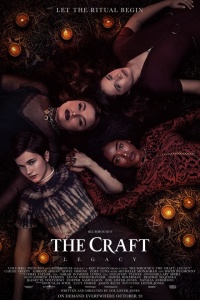 When Lily (Cailee Spaeny) moves into a new town with her mother Helen (Michelle Monaghan), she surprises them both by quickly making friends. They are outsiders Frankie (Gideon Adlon), Lourdes (Zoey Luna), and Tabby (Lovie Simone) who invite Lily to join their coven and together the four of them explore their powers and witchcraft.

I watched and reviewed the original The Craft last time I did blogtober so thought this was the perfect time to get around to watching the (very loose) sequel. It is definitely the kind of sequel where you don’t have to have seen the original to understand it.

While they’re not the focus of the film, I did really like Lily and her mum’s relationship. They were a very believable mother/daughter duo and I liked how Helen stuck up for Lily against her new partner Adam (David Duchovny) and his stricter parenting style. The young cast have great chemistry and every scene the four girls are together is good fun. Lily is definitely the protagonist of the film and it is a shame that the other three girls only get the most superficial of character descriptions and each fit a kind of archetype to make them recognisable. Perhaps unfortunately one of the most compelling characters is Timmy (Nicholas Galitzine), a boy in their class who goes from stupid jock to a sensitive guy when magic gets involved. For a film that’s big on feminist messages, to mixed results, it’s simultaneously interesting and regrettable that a male character and their arc almost has the most to say.

The Craft: Legacy does have some things to say about feminism and toxic masculinity which I wasn’t expecting. It sure is heavy-handed at times but it’s still an interesting inclusion. In the latter half of the film especially there’s stuff like when teen girls embrace witchcraft aka their power and agency, men want to control or take away that power as they feel women shouldn’t have it and shouldn’t be more powerful than men.

The Craft: Legacy is a 90-minute film which is so often a great thing as it’s always nice to watch a film in less than two hours, but in this instance, I think The Craft: Legacy could’ve used at least 10 minutes more. The final act/big reveal seems very rushed and I’d have liked to have learnt more about the potential repercussions for the girls’ actions.

I was surprised by how much I enjoyed The Craft: Legacy. It’s probably not technically the greatest film, but it’s fun and seeing the power of female friendship on screen is always a good time. 3/5.