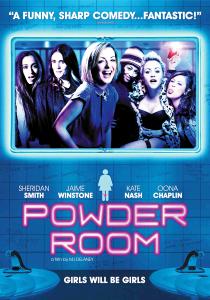 When Sam (Sheridan Smith) goes on a night out with her old college friends, she is forced to revaluate her life as her new best friends arrive in the club and threaten to ruin the façade she’s put on for her old, more successful friends.

The majority of Powder Room takes place in the women’s toilets of a nightclub, a place where there’s arguments, laughter and tears. Having it set in such a small place means characters are always bumping into each other and there’s secondary characters who appear as the film goes along and you see how their night turns out too.

There’s so many relatable characters and situations in Powder Room. Sam is trying to appear more successful than she is and hiding who she really is from her old college friend Michelle (Kate Nash) and her friend Jess (Oona Chaplin) who are both beautiful and have seemingly wonderful lives in Paris. Sam’s best friend Chanel (Jaime Winstone) is a man-eater, while Paige (Riann Steele) is worrying she’s become boring now she’s settled down with her boyfriend and Saskia (Sarah Hoare) just wants to have a laugh.

Powder Room is a lot of fun and it’s British comedy at its best. So many young women can watch it and recognise themselves or who they used to be, sneaking into nightclubs when you’re under eighteen or ending up spending more of the night in the toilets than on the dance floor. Perhaps most importantly, it’s funny and honest about what female friendship is really like – both the highs and the lows. 5/5.