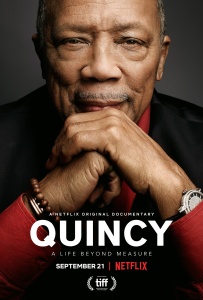 Documentary about the life and career of music legend Quincy Jones.

This documentary is a bit of a mixed to negative bag. For me personally, Quincy Jones was a person I was aware of but definitely didn’t know a lot about. So, Quincy is a good overview of all the musicians he’s been involved with, his work through the decades and his personal life, however it never really delves deep into any of it so if you were a Quincy Jones fan who knew a lot about him already, I doubt you’d get anything from this doc.

The documentary goes between the present and Quincy Jones’ whirlwind work schedule even though he’s in his mid-80s and the past, starting at his childhood to how he got into music and made a career out of it. The segments in the past are narrated by Jones, making them feel less genuine in a way and also pretty unoriginal. You never really get an insight into his creative process and how working with various other artists might’ve made it different. Instead, it is just a man, telling his life story and the various anecdotes about the musical legends he worked with like Frank Sinatra and Ray Charles are nice to hear it all feels like a rehash of his Wikipedia page.

The moments where something surprising does happen, like the two times Jones has a medical emergency and ends up in hospital, are glossed over pretty quickly. While he is told he needs to do more exercise and work and travel less, what you see on screen doesn’t make you think he took the doctors warnings that seriously.

Quincy is co-directed by his daughter, actress Rashida Jones, and the whole production does feel very much like an outcome of nepotism. One of the first scenes is of Rashida Jones trying to learn how to use the camera and it feels a bit awkward. She’s often with her father, asking him pretty leading questions so it feels staged and like she gets the answers she was aiming for.

As a documentary it’s pretty standard and while it does give a decent overview of Quincy Jones’ career, if you knew his major career milestones like becoming a film composer, working with Michael Jackson on “Thriller”, becoming a producer and “discovering” Oprah Winfrey, then you don’t need to watch Quincy. It’s like the greatest hits of his life and features a load of famous people singing Jones’ praises. It feels a bit shallow and maybe it’s because the documentary was made by his daughter that there aren’t any huge surprises or much depth. She may not want to probe deeper into her father’s life out of respect for him and Quincy Jones has the power to just make the documentary what he wants. 2/5.