Harry (Daniel Radcliffe), Ron (Rupert Grint) and Hermione’s (Emma Waston) search for the remaining Horcruxes brings the back to Hogwarts, where the final battle for the fate of the wizarding world rages on.

Harry Potter and the Deathly Hallows: Part 2 is near enough all action. It’s thrilling and spectacular action too. The battle of Hogwarts is thrilling and brutal. School kids get hurt, teachers fight and there’s so many loved characters in peril. With so many people on either side of the battle field, it has all the scope of an epic war movie, and it feels like one too. Especially as it packs an emotional punch when there’s naturally casualties of war.

In amongst all the explosions and magical firefights, there’s some lovely little character moments too. Neville (Matthew Lewis) gets his time to shine, being a natural hero and leader to those left behind at Hogwarts. Professor McGonagall (Maggie Smith) standing up for her students and protecting her school is wonderful, as is any moment between any members of the Weasley family.

The performances are all brilliant. Supporting actors like Alan Rickman get the chance to show off a more nuanced performance as Snape. Likewise, Ralph Fiennes’ Voldemort is not just the shouty villain we’ve seen previously; here he is scared, angry and powerful, an intimidating presence that seems to be on the edge of either victory.

Radcliffe, Watson and Grint have all matured in their roles, each giving a powerful performance as their characters arcs some to a close. This trio is the heart and soul of this film, and the franchise as a whole, and they all do their characters proud.

Harry Potter and the Deathly Hallows: Part 2 is an incredibly satisfying and exciting conclusion to the Harry Potter series. 5/5. 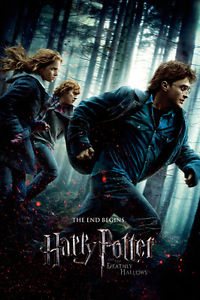 As Voldemort (Ralph Fiennes) and his followers gain more power, Harry (Daniel Radcliffe), Ron (Rupert Grint) and Hermione (Emma Watson) race against time to destroy the remaining Horcruxes and to learn more about the three most powerful objects in the wizarding world – the Deathly Hallows.

Harry Potter and the Deathly Hallows: Part 1 is the penultimate film in the series and as the source material is packed full of new information and big reveals, it makes sense that this is the book they chose to split into two films. This does mean this film has a bit of a non-ending but besides from that it’s a great build up to the final showdown between good and evil we’ve been waiting so long for.

Harry Potter and the Deathly Hallows: Part 1 is more character-focussed than a lot of its predecessors, delving into the psyche of the main trio as they face a situation that feels truly hopeless. From the very beginning of the film, there’s threat in the air and characters that we’ve known for years get hurt or even die. It’s a film that starts with a bang and continues at a steady pace, blending the character drama with moments of tension and action.

There is more of the characters just walking and talking as Harry and his friends know they are meant to find and destroy Voldemort’s Horcruxes, but actually doing that is another matter entirely. The chemistry between the trio and the assured and mature performances, make these many scenes engaging. Still, when there is a more action-packed sequence, the tension is increased and they are always well-shot and exciting.

Harry Potter and the Deathly Hallows: Part 1 is a great build up to the final battle. It’s a grim situation Harry and his friends are in, but there are moments of happiness and hope to be found here, which reiterates their belief that there’s something worth fighting for and good can win. 4/5.

Harry (Daniel Radcliffe) and Dumbledore’s (Michael Gambon) warnings of Voldemort’s (Ralph Fiennes) return are ignored as the Ministry of Magic sends Dolores Umbridge (Imelda Staunton) to Hogwarts to be the new Defence Against the Dark Arts teacher. With her failing to teach them how to defend themselves, Harry and his friends’ band together to learn how to fight, as darkness grows

As I was rewatching this film, I realised that now I’m in the latter half of the series, these are the films I haven’t seen as many times and don’t necessarily remember everything about them. As I said previously, Prisoner of Azkaban is my favourite and I’ve probably watched that film the most out of all of them, but I’ve also ended up seeing pits and pieces of the first four films on TV, as those are the films seem to be on TV the most. Anyway, onto the review.

Harry Potter and the Order of the Phoenix is the first film in the series that David Yates directed, and he goes on to direct the rest of the films in the series. It’s a film that’s a lot darker in tone. Harry is having nightmares after seeing a fellow student killed in front of him and he’s feeling isolated especially as Dumbledore appears to be avoiding him. The colour palette of the film is colder too, everything seems slightly blue which is especially noticeable in contrast to the previous films where scenes at Hogwarts seem so full of warmth.

The scenes where Harry is teaching his classmates is wonderful. He’s so encouraging and it’s fun to see these kids skills progress – when Neville (Matthew Lewis) masters a spell everyone is so happy for him. Together these young people have made a supportive environment, which so many of them need when there’s outside forces working against them – including Umbridge.

Umbridge is a brilliant character and one of the most evil villains in the series. She’s a bureaucrat on a power trip, convinced she’s right and is better than everyone. Seeing other teachers disapprove of her, even in small ways, is great as it shows that the teachers are human too.

The Order of the Phoenix is full of highs and lows. When there’s action set-pieces they are well-shot and exciting, but as there’s so much talking between characters, sitting around a table discussing what they should do next, the film can be slower and less interesting at times.

Harry Potter and the Order of the Phoenix is a lot darker and is full of new information that helps make the threat of Voldemort and his follows more real. The finale is a bit lacking as due to the script, and Goblet of Fire’s script as well really, characters aren’t utilised enough so when tragic things happen, it doesn’t have as much of an impact as it should. 3/5. 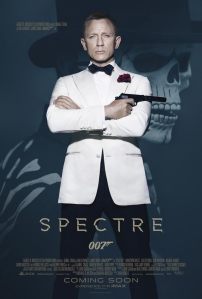 When James Bond’s (Daniel Craig) past comes back to haunt him, he discovers a sinister organisation. Meanwhile in London M (Ralph Fiennes) has battle a political programme to keep the secret service alive.

The opening sequence in Mexico was amazing. It really starts SPECTRE with a bang and it’s a highlight of the film. The continuous tracking shots of Bond as he moves from the crowded streets to the rooftops are brilliant and then the helicopter stunts are tense and jaw-dropping. It’s one of the best opening’s to a Bond film and then follows Sam Smith’s theme song which plays incredibly well with the title sequence.

SPECTRE has a lot more humour than the previous Craig-Bond films and it does well in balancing the humour and the tension. The action-scenes are still pretty great but t’s the hand-to-hand fights that are the most impressive. When Bond faces off against Mr. Hinx (Dave Bautista) it’s a sight to behold and I loved Hinx, he’s huge and deadly but also smart, definitely a worthy adversary for Bond.

The guy puling all the strings is Franz Oberhauser (Christoph Waltz). He commands the screen whenever he appears and he has great chemistry with Bond. Part of me wishes there was more of him in SPECTRE because he was a joy to watch on screen but then I think it was great having this omnipresent character in the shadows, just out of reach and taunting Bond.

Team MI6 were great in SPECTRE. M has his own story and it’s great to see him in a political battle with Denbigh (Andrew Scott). I continue to love Moneypenny (Naomie Harris), Q (Ben Whishaw) and Tanner (Rory Kinnear) and their relationship with both Bond and M, SPECTRE makes Q and Moneypenny seem more like their own characters even though their primary purpose it to help M and Bond.

The main problem I had with SPECTRE is that there’s so many references to previous Bond films. I probably wouldn’t have noticed anything if I hadn’t had my Bondathon this year but watching SPECTRE I couldn’t help but be reminded of various Bond films. Elements from Dr. No, From Russia with Love, On Her Majesty’s Secret Service and Licence to Kill are all featured in SPECTRE to various extents. In some ways it could be a nice homage but really I found it quite distracting and SPECTRE didn’t really end up feeling like it’s own film.

SPECTRE is a lot of fun and is action-packed but the continuous references to previous Bond films is quite jarring and the ending wasn’t quite what you’d expect for Bond. 3/5.