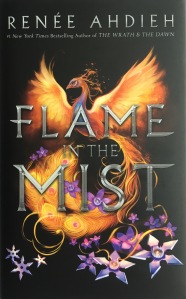 At seventeen years old, Mariko is sent to the imperial palace to marry a man she did not choose, a man who is the son of the Emperor. But her journey is cut short when her convoy is attacked by the Black Clan – a group of bandits and thieves who were hired to kill Mariko before she could reach the palace. But Mariko survives and vows revenge on those who want her dead. Disguised as a peasant boy, she infiltrates the Black Clan, becoming one of them, impressing them with her wit and ingenuity. But as she gets closer to her enemies, Mariko begins to discover a web of lies and a history of secrets that will change everything she thought she knew.

Flame in the Mist is set in Feudal Japan but there’s also some magical elements in it too. I really in the liked how the historical was entwined with the magic and myths, both seemed very groundedses characters reality. When this book first came out I heard it was a Mulan retelling or inspired by Mulan, and it’s really not. The only similarity to Mulan is that the main protagonist is a girl who disguises herself as a boy in order to further her aims. Mariko’s goals are very different to Mulan’s. Mariko is very smart in terms of academia and alchemy, but is incredibly naïve when it comes to life outside her gilded cage. She doesn’t know how to hunt or cook or fight and often gets into verbal sparring matches with those around her to try and hide her failings.

Mariko likes to think she’s good at reading people, and has learnt to be underestimated, being a daughter of a prominent Samurai, but when she meets Ōkami she has a much harder time getting a read on him. The dynamic between Mariko and Ōkami is an interesting one and they bounce of each other really well, managing to intrigue and unsettle one another at the same time. Ōkami is just the sort of character I end up really liking. He’s slow to trust but loyal, has a deadly set of skills and is smart. He and Mariko make an unconventional partnership.

Flame in the Mist was a bit slow to pull me in. While it kicked off straight away with the attack on Mariko’s convey, I found it took a while to connect with her and her story. As the story progressed, more characters began to reveal themselves, their political aspirations and loyalty, slowly showing that Mariko was caught up in plots much bigger than herself. The second half of the book sped along though. There was a lot of action, fights and secrets revealed and it became a proper page-turner.

Flame in the Mist is the first book in a duology so natural there’s a lot of threads left hanging, though there was some good character stuff throughout the book. While I won’t be rushing out to get it as soon as it’s released later this year, I will be picking up Smoke in the Sun at some point as I did end up enjoying Mariko as a character and am interested to see how all the plot threads are wrapped up, especially the political ones. 3/5.

My FairyLoot box arrived over the weekend and I was looking forward to seeing what was inside it. I don’t get a FairyLoot box every month (because of the cost and I have the naïve belief that it’ll give me more unread books on my TBR but I do that myself to be honest) but I had to get this month’s box because the theme, Warriors & Legends, sounded fab.

I think the box was really well put together and had a lot of cool stuff in it. There’s an exclusive blend of loose leaf green tea from The Tea Leaf Co – I don’t drink tea so no doubt I’ll be finding it a good home, but I do love the design on the container. I’ve become slightly addicted to candles lately so I love the box included one. There were two different candles you could’ve ended up with from In The Wick of Time, one called Flame and one called Mist. The Mist candle was in my box and I love the scent, it’s warm stone and woodsmoke and it’s a lovely subtle scent. 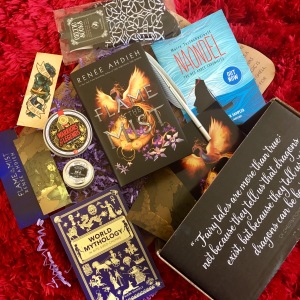 The box also included an exclusive wooden Lord of the Rings bookmark from Ink and Wonder, a pair of Celtic patterned socks, a metallic feather pen from Flora’s Wonder Emporium and a chapter sampler of Naondel by Maria Turtschaninoff which sounds like a feminist fairy-tale.

There were actually two books in this month’s box. The first is World Mythology in Bite-Sized Chunks by Mark Daniel, a cool introduction to different myths and legends from across the world. And the second was the main event – Flame in the Mist by Renée Ahdieh. I’ve heard so much about this book on social media over the past few months but never realised it was a Mulan-inspired story set in feudal Japan. Someone should’ve told me that and then it would’ve been right up my TBR! Flame in the Mist came with a signed bookplate, bookmark and a letter from the author and I do like how FairyLoot put the book in a little bag so it doesn’t get damaged on its journey in the post.

I do like FairyLoot boxes. They always feature cool things that are to a high quality and stuff books that I wouldn’t normally get myself but nearly always enjoy. Next month’s theme is Elementalists and I think there’s still some boxes left if you’re quick.