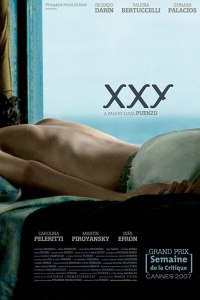 Fifteen-year-old Alex (Inés Efron) is intersex and is living as a girl, but she and her family begin to wonder if she’s emotionally a boy when another teenager’s sexually advances bring things to a head.

XXY is set in a small coastal town in Uruguay and unfortunately, a lot of people there are closed minded about people who are different. Alex and her family have kept the fact she’s intersex a secret but as everything comes to a head, the cruelty of others is revealed and it is uncomfortable to watch.

XXY is a slow, thoughtful film. Many times the camera lingers on Alex, her body or just her face, as she wanders alone. The coastal setting with the beach and the stormy sea fits the tone of the film as Alex often feels alone as no one can know how she feels, even her parents who want to look out for her. Her father (Ricardo Darín) is especially kind and protective and he puts in a lot of time and research into figuring out how best to support Alex as she tries to decide who she wants to be.

Inés Efron gives a brilliant performance as Alex. Showing the hope and fear she feels, as well as her rebellious nature. The chemistry between her and Martín Piroyansky who plays Alvaro, the son of her mother’s friends who comes to stay, is there but it’s interesting. The dynamics between their two characters are constantly shifting as they get to know one another and make a connection that neither of them was expecting.

XXY is a sincere take on the struggles a young person can face when figuring out who they are, and if they’re OK with that. The haunting score and stark setting makes XXY feel bleak but there are moments of happiness and hope their for Alex and her family too. 3/5.