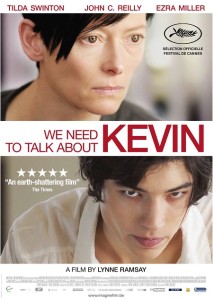 Eva (Tilda Swinton) struggles to love her strange son Kevin (Rock Duer, Jasper Newell and Ezra Miller depending on age) due to the increasingly vicious things he says and does as he grows up. But Kevin is just getting started and is final act will be beyond anything anyone could imagine, and Eva struggles to deal with the consequences.

We Need to Talk About Kevin jumps in time between the present where Eva is trying to deal with the consequences of her sons actions and various points in the past as Kevin grows up. As the film progresses you slowly realise what it is that Kevin has done and why the community has turned against Eva.

The film is unsettling because you know something bad is going to happen and you’re just waiting for that moment. You’re also waiting for someone to take Eva’s concerns about her son seriously. Her husband Franklin (John C. Reilly) seems to miss all the times Kevin is acting up, instead he is the fun dad who plays video games with his son and gives him the benefit of the doubt.

The cinematography is stunning and with the eerie soundtrack, adds to the tension that slowly builds throughout the film between Eva and Kevin. Swinton and Miller have weird chemistry between them and both their performances are incredible. Really it is Swinton’s film and her performance is mesmerising, while Kevin is almost like this negative presence you feel at the back of your neck.

We Need to Talk About Kevin poses the nature vs nurture debate to the extreme. Should Eva have tried to understand and love her son more? If she did, would she have been able to stop him? Or was there something not right with him from the beginning and there was nothing she could’ve done? But if that’s the case, surely it’s still Eva’s fault for she is his mother and he came from her?

We Need to Talk About Kevin is a brilliant mix of family drama, thriller and horror, it’s an unsettling film to watch but it’s also compelling and you can’t look away. 5/5.