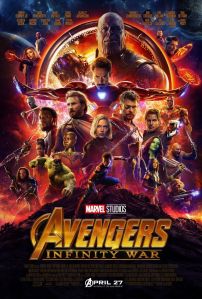 When the Avengers and their allies learn of Thanos (Josh Brolin) and his plan to bring balance to the universe by destroying half of it, they must attempt to put a stop to his plan.

Avengers: Infinity War is the culmination of ten years of planning and films and it really does pay off. The way the various characters are introduced feels organic, as do the various team ups that happen during the film. Seeing these characters interact is a joy and there’s a lot of moments on humour as they either clash or find common ground.

Infinity War is Thanos’s is film. He is the biggest and baddest villain featured in the Marvel Cinematic Universe so far. He is a formidable foe and from the very start of the film you can see how powerful and destructive he is, and from then on you know the heroes are in grave danger. Between Josh Brolin’s performance and the computer wizardry that brought Thanos alive, Thanos was an imposing presence, even when he wasn’t on the screen. Also, you understood his motivation as the film spent time showing the reasoning behind his actions and making him more than just the bogeyman we’ve caught glimpses of in previous films.

The Russo brothers do a great job bring all the characters together and balancing the action, drama and humour. Because that’s the thing with Infinity War, it still has a lot of laugh out loud moments, most of which are from the character interactions, but it also has a real sense of threat as none of these characters are safe from Thanos. How they juggled the action has to be commended and there’s a lot going on at once, with different characters in different places, but no plotline felt dull compared to another. The story flowed really well and while there is a lot of action sequences and fights, there’s still small character moments that make this epic team up special.

Avengers: Infinity War is thrilling, shocking and just all out incredible. It’s runtime of over two and a half hours goes by before you realise as there’s so much happening and there’s never a dull moment. There’s surprises throughout the film and the climatic showdown is brilliant. Avengers: Infinity War is an epic and a more than satisfying viewing experience – there’s a good chance it will leave you speechless. 5/5.

I’ve done my best to keep this review as vague as possible as Infinity War is definitely the kind of film you should go into knowing as little as possible – it’s truly an experience. My spoiler-filled review will be up later this week. 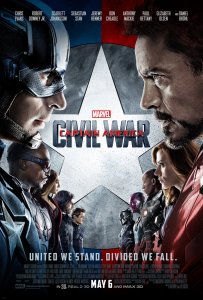 After a string of dangerous and deadly missions that put the public at risk, the Avengers are told they must be regulated by the U.N. While Tony Stark (Robert Downey Jr.) agrees with these measures, Steve Rogers (Chris Evans) doesn’t trust them. This causes a divide between the team that’s only exasperated when Steve’s best friend and former assassin Bucky Barnes (Sebastian Stan) resurfaces.

Anthony and Joe Russo return to the Marvel Cinematic Universe after directing Captain America: The Winter Soldier and the way they put together this film is great. The action sequences are well-shot, there’s only a few instances of shaky-cam and most of the time fight scenes are framed in a wide shot so you can see exactly what’s going on. Also the way they manage to film multiple characters fighting but you never lose focus of where each character is and what they are doing is truly commendable.

A big part of the film is obviously this conflict between Steve and Tony and the sides various characters choose. The great thing about Captain America: Civil War is that you understand why these characters disagree and as the viewer you can see it’s not black and white and there’s pros and cons to both sides of the argument. At the beginning of the film there’s a sit down discussion between a lot of the characters and you get why the stakes are so high and what these regulations mean to them all.

The tension builds between all the characters as the film progresses and in many ways it’s similar to a Bourne thriller as characters go on the run and try to figure out the truth. While I won’t go into any depth of the different characters motivations, I can’t not mention Prince T’Challa aka Black Panther (Chadwick Boseman). He is a guy who has the weight of a country on his shoulders but he is still fallible. He isn’t particularly on anyone’s side, he is on his own side and it makes him an interesting third party to this conflict. Civil War gives Black Panther a brilliant introduction and there’s going to be many people excited about his solo film.

There are a lot of characters in this movie but thanks to a great script, they all get their moment in the spotlight though some may have that moment longer than others. Really while Civil War is in a way both a sequel to Avengers: Age of Ultron and Captain America: The Winter Soldier, at the heart of it, it is a Captain America movie. It’s the relationship between Steve and Bucky that drives a lot of their character motivations, and the motivations of a lot of the characters around them. the two of them are the heart of the film and it’s a good job Evans and Stan have such a good understanding of their characters and give such great performances because if they didn’t, Captain America: Civil War really wouldn’t be as good as it is.

Captain America: Civil War is a phenomenal film. While there’s all this conflict and amazing action sequences, at the heart of the film is the characters and their relationships. It’s what drives the plot and makes the film so great. 5/5.