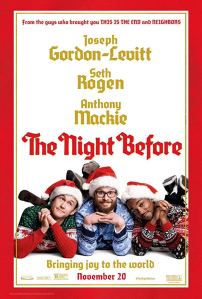 Every year for the past fourteen years best friends Ethan (Joseph Gordon-Levitt), Isaac (Seth Rogen) and Chris (Anthony Mackie) have gone out in New York City together on Christmas Eve. But now they’re getting older and are getting more responsibilities, this year the Christmas tradition is coming to an end and to end on a high they’re finally going to attend the Holy Grail of Christmas parties – the Nutcracka Ball.

The Night Before is very funny. It’s kind of a stoner comedy in the sense that the three friends spend a good chunk of time searching for weed but it is only Seth Rogen’s character that gets high on just about every type of drug imaginable. Cue silly antics as he starts panicking about being a father, loses his phone and is generally not able to function. There are some great cameos in The Night Before, some of them are truly unexpected yet brilliant, and the supporting cast is a lot of fun too with Mindy Kaling being a highlight. Then there’s Michael Shannon who plays Mr. Green the intense yet strangely wise drug dealer. His scenes are some of the funniest while also being oddly Christmassy as he often makes one of the trio of leads think about their lives and what’s important to them. He’s kind of like a stoned version of Clarence from It’s a Wonderful Life, and amazingly it works and adds to the Christmas feels that are there beneath the cursing and dick jokes.

In amongst all the drugs and swearing, the main theme of The Night Before is surprisingly sweet and heartfelt. Gordon-Levitt, Rogen and Mackie all have great chemistry and they really feel like lifelong friends. They are each at different stages of their lives, Isaac is about to be a father, Chris is a famous football player, while Ethan is feeling a bit lost as he’s no longer with his girlfriend and his career isn’t going anywhere. At its heart this film is about the trio of best friends and how friendships evolve as people grow up but that doesn’t mean you can’t still be friends and grow up together.

The Night Before is funny and often silly and ridiculous, but with the three leads having such great chemistry and New York City feeling so Christmassy, it unexpectedly feels like a true Christmas movie in the sense anything can happen, and it’ll be in the spirit of Christmas. 4/5.