Right. Here are all my spoilery thought about Avengers: Endgame, I highly recommend not reading this if you haven’t seen the film. My spoiler-free review is here.

I probably haven’t mentioned everything I noticed or wanted to say because there was so much and I see new things every time I see it. I’ve seen Endgame three times now and still think it’s an incredible end to a series of 22 films. My comments are a mixture of stuff that happened in order, and character focussed stuff. This post is probably a mess so you’ve been warned. END_OF_DOCUMENT_TOKEN_TO_BE_REPLACED

WARNING! This is my spoiler-filled review of Infinity War, if you haven’t seen the film or just generally don’t want any spoilers my spoiler-free review is here.

Now I don’t think this will be in any particular order and I definitely won’t manage to talk about everything, these are the things that stuck with me the most that I wanted to talk about.  END_OF_DOCUMENT_TOKEN_TO_BE_REPLACED 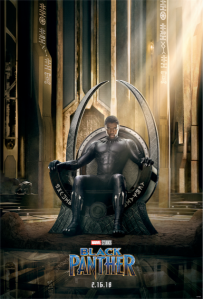 The first teaser trailer for Black Panther was released overnight and it was the first thing I watched this morning.

I LOVED IT! It’s a teaser so you don’t get it explicitly explained who each of the many characters you see snapshots of are or what the conflict in this film will be but that’s more than fine. I love seeing so many awesome women fighting, Michael B. Jordan looks cool and kind of hot and scary at the same time and Chadwick Boseman as T’Challa still looks super regal and amazing.

I love the conversation at the start of the trailer between Klaw (Andy Serkis) and Everett Ross (Martin Freeman), how Klaw says that Wakanda is this all powerful and advanced country and the front they put out to the rest of the world is exactly that, a front. It’s great world building of this fictional country, a country which should (and by the look of this teaser I think it does) be just as much a character to the story of T’Challa and his people as any other character.

Wakanda looks beautiful. It’s an African nation of the future, today. I love the mixture of technology and skyscrapers with the African landscape. It all looks amazing.

This trailer is all about setting up the look and the feel of this movie and I couldn’t be more excited. All the characters with their costumes and weapons look amazing, everything is so bright and colourful and when there is a quick shot of a fight scene featuring Black Panther it’s exciting. The final shot of T’Challa jumping from one flipping car to another was kind of jaw-dropping.

I like the voiceover talking to (I presume) T’Challa, saying how he is a good person but it’s hard for a good person to be a King. I really hope the film explores the political difficulties of a country’s King being its superhero protector, and this line makes me think it will. T’Challa is such a different character compared to the other heroes in the MCU (and in superhero movies in general), he won the mantel of Black Panther and is a king, he isn’t an average guy who got his abilities in an accident like so many of the other heroes we see. Yes, Thor is a prince but he does not have the same level of responsibility that T’Challa has.

I love the feel of this film and everyone involved. The director is brilliant, the entire cast are great in just about everything they’ve ever been in and I’m so excited to see this new chapter of the MCU. I feel like Black Panther along with Thor: Ragnarok are going to bring something unique and vibrant to the MCU and I’m so looking forward to it. Black Panther has been my most anticipated superhero film ever since it was announced a few years ago. Seeing Boseman as T’Challa in Captain America: Civil War made me even more excited because he brought the regal gravitas as well as a bit of impulsiveness to the role. Black Panther has been one of my favourite superhero characters ever since I watched the Avengers: Earth’s Mightiest Heroes cartoon (great series, definitely recommend it) and I can’t wait to see him leading his own film.

Only eight months to wait!

I posted my spoiler-free review of Captain America: Civil War a few days ago and you can read that here. This my spoiler review and it’s kind of ended up in any old order where I mostly talk about each character and what I liked about them. Be warned this is a long post – it’s over 1,800 words! Now below is all my spoiler-filled thoughts on the movie so once again you have been warned! I really advise you not to read any further if you haven’t seen the film. END_OF_DOCUMENT_TOKEN_TO_BE_REPLACED