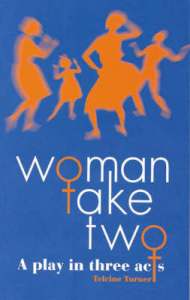 Set in The Bahamas in the early 1970s, Woman Take Two tells the tale of a few people forging alliances for themselves – for love and/or money. There’s Harold Davies, a businessman who will do anything to save face and further his career, including using his teenage daughter Sofia in his nefarious plans. Then there’s Beverly Humes and her fiancé Lionel Joseph who find themselves entangled in Harold Davies’s schemes.

It’s been a while since I’ve read a play and I always find it an interesting experience. Woman Take Two is a very short play with just three acts and 93 pages. The story is relatively short, and the action only takes place over a couple of times, but there’s still some good character beats which would make it an interesting play to see performed. I liked how in the dialogue there were colloquialisms and they also defined what they meant. The colloquialisms added a sense of realism to the characters and made the dialogue flow easily.

Harold is not a nice person and he is cruel to both his employees and his family. He is a strong patriarch that won’t take no for an answer. It’s difficult to tell if he is good at manipulating others, or if it’s just the people he manipulates are naïve and trusting.

A lot of the problems that face characters in Woman Take Two, especially Lionel and Beverly, could’ve been solved if they had actually communicated better. Lionel especially went a roundabout way to explain himself and the situation he was in, wasting time and other people’s trust. Obviously, you need conflict in a play, but this was one that seemed contrived and had the potential to be easily solved.

Woman Take Two is an interesting play about relationships, greed, and mistrust. 3/5.