Princess Winter, the stepdaughter of Queen Levana, is admired by the people of Lunar for her beauty and her grace but little do they know about the visions in her head. Winter finds comfort and sanity in her childhood friend Jacin as she struggles to stand up to her stepmother and her rules. There’s some hope for Winter as Cinder and her crew plan to invade Lunar and start a revolution. Winter must find her courage and the threads of her sanity to try and work with Cinder to help save her people.

As this is the third book in the series there may be some vague spoilers for the previous books Cinder, Scarlet and Cress but they will be kept to a minimum.

Winter is a fascinating character. On the surface she seems quite mad and perhaps a bit useless when it comes to overthrowing a Queen but really she is incredibly strong and smart. She has horrible visions that often have her frozen in fear but because so many people think she’s crazy, they underestimate her and how she’s more perceptive than people might think. Also I love how kind Winter is to the people of Lunar, she puts them before herself a lot of the time and never feels better than them because she’s royalty. END_OF_DOCUMENT_TOKEN_TO_BE_REPLACED

To celebrate the release of Winter, the final book in The Lunar Chronicles series, Book Addicts Guide has put together a special Lunar Chronicles Book Tag! So without further ado, here’s the tag! 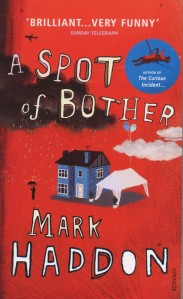 A Spot of Bother by Mark Haddon
No one I know has read this book and it’s one of my favourite adult fiction books I’ve ever read. It’s all about a dysfunctional family and it’s so funny.

KAI | The prince
a book about royals/royalty

The Princess Diaries by Meg Cabot.
This was one of my favourite series as a child/young teenager and had a big impact on me and my taste in books – Meg Cabot was one of my auto-buy authors for years. END_OF_DOCUMENT_TOKEN_TO_BE_REPLACED

Cress has been locked in her satellite for most of her life, it’s her own little world where she spies on Earth for Queen Levana. Soon Cress’s world gets a lot bigger when she makes contact with Cinder and her motley crew. Cress ends up on Earth in the desert with Thorne. Meanwhile Cinder, Iko and Wolf need help and Scarlet is all on her own. Cress needs to be brave as she’s suddenly in a world of adventure she’s only ever dreamed of.

As this is the third book in the series there may be some vague spoilers for the previous books Cinder and Scarlet but they will be kept to a minimum.

While Cress may be the titular character, that doesn’t mean all the characters you already know don’t have a lot happening with them. Cress is definitely an ensemble book and the finale features them all working together in a heist! I love heists a ridiculous amount and seeing how all these different characters who each have their own problems and differences work together to try and save the day was a joy. END_OF_DOCUMENT_TOKEN_TO_BE_REPLACED

This month I continued with The Lunar Chronicles (Re)Readalong aka #TLCReadAlong on Twitter run by BookAddictsGuide and read Scarlet by Marissa Meyer – I ended up enjoying this book even more than the first one. As a part of The Lunar Chronicles (Re)Readalong there’s bonus posts you can do and I’ve chosen to write about some awesome grandparents in film. Scarlet’s grandmother is pretty great, she used to be in the military, won’t be bullied and has a great relationship with Scarlet. So here’s some other great grandparent relationships.

Queen Clarisse Renaldi is the Queen of Genovia and isn’t perhaps the most maternal grandmother to start with, she’s incredibly prim and proper but that’s just because she cares what happens to her country. Still, after spending time with Mia, they get along really well, she even discovers the joys of corndogs and the funfair, and will do her best to protect Mia from the press and anyone else who tries to hurt her.

The Proposal
Grandma Annie is hilarious – Betty White plays her so of course she is. Her 90th birthday is the reason Margaret and Andrew are up in Alaska pretending to be in love and engaged. Gammy dances for the Gods, she has a cute Pomeranian and she’s the one who realises that Margaret really does love Andrew and even fakes a heart attack to help them actually talk to each other. Gammy is the best. END_OF_DOCUMENT_TOKEN_TO_BE_REPLACED

Scarlet Benoit’s grandmother is missing. The police have closed the case and everyone thinks her grandmother was an odd ball anyway and no one cares. The only person Scarlet can turn to for help in tracking her grandmother down is Wolf, a streetfighter who Scarlet isn’t sure she can trust but they can’t help but find themselves drawn to one another.

As this is a sequel, there may be some vague spoilers for the first book Cinder but I’ll try to keep them to a minimum.

Scarlet is a great character, she’s hot-headed and easy to anger but is also incredibly loyal and brave. She balances out well with Wolf as while they’re quite similar, he tries to keep his anger and aggression bottled up so he’s always a bundle of energy. As you may know, I’m not always a fan of romance subplots but I really liked how Scarlet and Wolf’s relationship was handled. There is an attraction between them but they both know that they can’t necessarily trust each other and there’s always the worry about any lies that could come between them. END_OF_DOCUMENT_TOKEN_TO_BE_REPLACED

This month I took part in The Lunar Chronicles (Re)Readalong aka #TLCReadAlong on Twitter run by BookAddictsGuide and read Cinder by Marissa Meyer for the first time and really enjoyed it. As a part of The Lunar Chronicles (Re)Readalong there’s bonus posts you can do and I’ve chosen to write about my favourite Sci-Fi films, looking at films that feature robots, aliens and the moon since they are all major parts of Cinder.

I love sci-fi that tackles robots and technology and whether robots can have human-characteristics and even be human. I, Robot covers the laws of robotics and has a great take on cyborgs, robots and artificial intelligence plus it has Will Smith being awesome. It’s one of my favourite of his films.

Moon (2009)
Sam Bell is alone, working on the moon and can’t wait to get home. Things start to get weird when he discovers someone who looks exactly like him and he begins to question everything he has been told and his on sanity. Moon a great film full of suspense and Sam Rockwell is great as the only actor you see on screen throughout the film. END_OF_DOCUMENT_TOKEN_TO_BE_REPLACED 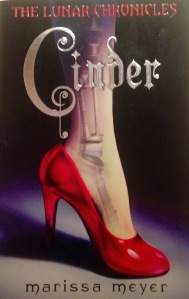 Cinder is a gifted mechanic in New Beijing, she’s also a cyborg hated by her stepmother. When her life becomes entwined with Prince Kai, Cinder finds herself caught between duty and freedom as the desires of an evil queen threaten to take over her home. Cinder must learn more about her forgotten past in order to not only learn who she is, but to also protect Earth’s future.

There’s been so much hype around Cinder and The Lunar Chronicles that I was a bit wary about starting the series but then The Book Addicts Guide set up the readalong and I thought it was the perfect chance to give it a go – I’m really glad I did.

Cinder, as you may be able to guess from the name, is a retelling of the Cinderella fairy tale and while that may be the starting point the story so much bigger and complex than the fairy tale. The world building is great as you learn about this future that’s plagued by an incurable illness and is under threat from a powerful queen, but at the same time it doesn’t forget about the characters, even minor ones get their time to shine. END_OF_DOCUMENT_TOKEN_TO_BE_REPLACED