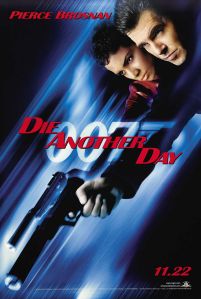 The opening sequence was suspenseful and action-packed and Bond’s actions in those first ten minutes had an effect on the rest of the film. It was also good to see how Bond’s escapades have repercussions for M (Judi Dench) and MI6.

Seeing Q (John Cleese) with all the old gadgets was like a trip down memory lane. There was the shoe with a hidden knife from From Russia With Love (1963) and the jet-pack from Thunderball (1965) and probably a lot more that I missed. It was a nice call-back to previous films in the series.

There’s a sword fight between Bond and Graves which was a lot of fun – Madonna even makes a cameo which was weird. The scenes in Iceland and the ice palace hotel are extravagant and they look great but due to a lot of the stunts they also seem quite ridiculous.

Graves wasn’t that much of an intimidating villain, Zao both looked and acted more threatening and his fights with Bond were a lot better. Jinx Johnson (Halle Berry) is the Bond Girl this time round and she’s an American government agent but is not necessarily working towards the same goal Bond is. She’s quite capable and has her moments to shine but does still need rescuing.

Die Another Day is an interesting film. In many ways it’s like the later Roger Moore Bond films as it goes rather outlandish and over the top. There’s the invisible car and a lot of CGI in the film which makes things go slightly unbelievable.

During my Bondathon, I don’t think I’ve ever commented on how a film was shot because nothing that interesting or noticeable has happened before. In Die Another Day there is frequent slow motion shots, that may or may not suddenly then be at double speed, and there’s sudden quick pans around a character a few times as well. It’s different and often jarring as it’s something incredibly noticeable – I don’t think it added anything to the film.

Die Another Day may look good and very modern compared to previous films even in Brosnan’s run, but the characters aren’t compelling and are all cardboard cut-outs of the standard Bond tropes. Also the overuse of special effects makes the film feel dated and a cheap copout for some of the great stunts seen before. 2/5.