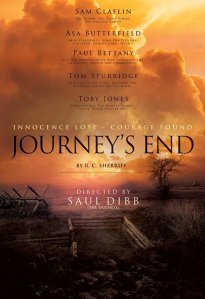 Set in the trenches in Aisne in March 1918, the story focusses on C Company and it’s officers, led by the young Captain Stanhope (Sam Claflin), as they wait for the German offensive they’ve been warned is imminent.

Journey’s End is a claustrophobic and tense film. The way it’s shot makes you feel like you’re in the trenches beside these young men. This is achieved by a lot of close ups and the fact you as the viewer only see as much as the characters do. Like them, you get no warning when there’s sniper fire or a barrage of bombs, you have the same information as the characters do and this increasingly racks up the tension.

The majority of the film is set in the trenches and in the officer’s dug out. The dynamics between the five officers, Stanhope, Osborne (Paul Bettany), Trotter (Stephen Graham), Hibbert (Tom Sturridge) and Raleigh (Asa Butterfield), switch between camaraderie to violence and anger as the pressures of their situations rest heavily on their shoulders. All actors give brilliant performances but Claflin was the standout. I’ve never thought he was a bad actor, but he never made much of an impact on me before, in Journey’s End he’s magnificent. The fear, anger and frustration was clear to see as he struggled to look out for his men when it seems like there’s no hope at all. He turns to drink to get him through but that in no way stops him being a good Captain, even as it’s clear to see his mental state is deteriorating.

While Journey’s End is a bleak film, there’s still moments of humour, most of them coming from the officer’s interactions with the cook Mason (Toby Jones). It’s often gallows humour but they are trying to make the most of their terrible situation. These moments of humour help flesh out all the characters as you get to see their personalities when they’re not just focused on what’s a few hundred metres across no man’s land.

Journey’s End is a powerful and gripping film. Everything comes together, the costume and set design, the simple yet haunting music, and the great performances, to make this a great war film. 4/5.

Far from the Madding Crowd is a beautiful film, in every sense of the word. The cinematography really shows of the beauty of the British countryside, as well as how beautiful the cast is. The music is gorgeous, emotive and very fitting to the story. The story itself is captivating and for an adaptation of a nineteenth century novel it’s almost surprisingly modern in how Everdene is presented as an independent young woman.

The film never really does what you expect with these characters – unless you’ve read the book of course. You expect there to be strong antagonism between Boldwood and Oak but you see they respect each other and the role they each play in Everdene’s life. The three suitors all have good and bad points and it’s clear to see why Everdene may want to be with one over another, or not be tied to one man at all.

Carey Mulligan is a fantastic lead, often giving a very subtle performance, and the whole cast is brilliant – the chemistry between Mulligan and Schoenaerts is electric. The scenes between them two were by far my favourite as they navigate the roles they play in each other’s lives.

Far from the Madding Crowd is a gorgeous film with compelling and understandable characters. 4/5.