Scott Lang (Paul Rudd) is under house arrest after the events of Captain America: Civil War but soon he’s roped into helping Hope Van Dyne (Evangeline Lily) and her father Hank (Michael Douglas) who are attempting to travel to the Quantum realm in the hope to find her mother still alive.

Ant-Man and the Wasp is a visually dynamic film. It has fun with the whole concept of people shrinking and growing, and to make things different compared to the first film, it also has cars and even buildings shrinking to tiny sizes. The fights are innovative, and having Hope become the Wasp is great as she has wings and blasters, making her fights just that bit different to Ant-Man’s.

After the intensity of Infinity War, Ant-Man and the Wasp is just a good action-comedy. Like the first Ant-Man film, Ant-Man and the Wasp has small-scale and personal stakes. Hope and Hank are desperate to find their lost mother and wife, Scott just wants to be a good dad to his daughter Cassie (Abby Ryder Fortson), and even the main villain Ghost (Hannah John-Kamen) doesn’t have world-domination intentions, and instead has a personal stake in the Quantum realm technology Hank Pym has created.

It’s the brilliant chemistry from its cast that makes Ant-Man and the Wasp so much fun and enjoyable. The banter between Scott, Hope and Hank is great and the way they all work together, however reluctantly to begin with, is fun to watch. Scott’s ex-criminal friends Luis (Michael Peña), Kurt (David Dastmalchian) and Dave (T.I.) bring the jokes, with Peña stealing just about every scene he’s in. There is almost an abundance of characters. FBI Agent Jimmy Woo (Randall Park) is almost constantly watching Scott, and businessman Sonny Burch (Walton Goggins) want the technology Hope and Hank have been building. There’s a lot of people after our main trio and one has to think that the film could’ve probably lost one antagonist and not lost much in the way of the actual plot.

Ant-Man and the Wasp isn’t ground-breaking but it’s fun. The many different types of familial relationships are what is at the films core and the action sequences are always entertaining. It’s just the sort of easy-watch summer superhero film you need after Infinity War. 4/5. 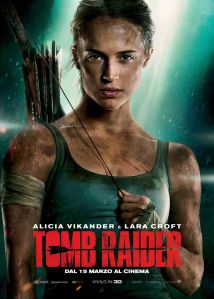 When Lara Croft (Alicia Vikander) goes in search of what happened to her father (Dominic West), who’s been missing (presumed dead) for seven years, she ends up on a mysterious island run by mercenaries led by Vogel (Walton Goggins).

We meet Lara Croft in this film as she’s striving to be independent and won’t except her father’s death. She’s a normal young woman (though admittedly one who is fitter than most) so seeing her be pushed to her emotional and physical limits as she struggles to discover the truth is great. Lara is capable but she’s also hurting, Vikander plays her complexities brilliantly. Throughout the film you could tell Vikander was doing the majority of her stunts and fights, adding to the excitement.

Once Lara arrives on the island the pace of the film slows down a bit, relying more on the intrigue of what Vogel’s looking for than fast-paced action. That’s not to say there aren’t any action sequences on the island. The sequence with the rusty plane is tense and thrilling, with Lara herself referring to the fact that everything seems to keep getting worse for her. This, amongst other reasons, makes Lara a character you root for.

The thing in the tomb that Vogel and his employer are looking for is a bit on the far-fetched but all the boobytraps are a joy to watch unfold. Also, Vogel’s motivations aren’t that clear and he and his men aren’t fleshed-out villains. There could’ve been any bad guy really, as this was Lara’s, and Vikander’s, movie and time to shine.

While it almost feels strange to hope for a franchise in this day and age, I really hope Tomb Raider is the start of a franchise. Alicia Vikander was a great Lara Croft and as Tomb Raider is Lara’s origin story, it would be great to see Vikander’s Lara go on a proper adventure of her own choosing. 4/5.

In post-Civil War Wyoming in the dead of winter, bounty hunter John Ruth (Kurt Russell) and his prisoner Daisy Domergue (Jennifer Jason Leigh) take shelter in a cabin already occupied by a collection of nefarious characters. No one is who they seem and John Ruth must protect his bounty till the blizzard passes.

The Hateful Eight is Quentin Tarantino’s eighth film and if you know anything about Tarantino and his type of films, you’ll kind of know what to expect from The Hateful Eight. There’s a lot of swearing, a lot of fast-talking, and a lot of violence and blood. It won’t be everyone’s cup of tea but what it does, it does well.

Joining John Ruth and Domergue in the cabin are Major Marquis Warren (Samuel L. Jackson) another bounty hunter, Chris Mannix (Walton Goggins) a man who claims to be the sheriff but no one really believes him, Bob the Mexican (Demián Bichir), Oswaldo Mobray (Tim Roth) the hangman, General Sandy Smithers (Bruce Dern) a quiet old man with a grudge and Joe Gage (Michael Madsen) a shifty-looking cowboy. All these characters together in a small space lead to an explosive showdown. However, the problem is that it takes a long time for them all to come together in the cabin. The first third or so of The Hateful Eight dragged as it was incredibly dialogue heavy and you only followed a couple of characters. Once everyone was together in the cabin, you got to see how all these different characters interacted and bounced off each other and that was the true delight in The Hateful Eight. END_OF_DOCUMENT_TOKEN_TO_BE_REPLACED